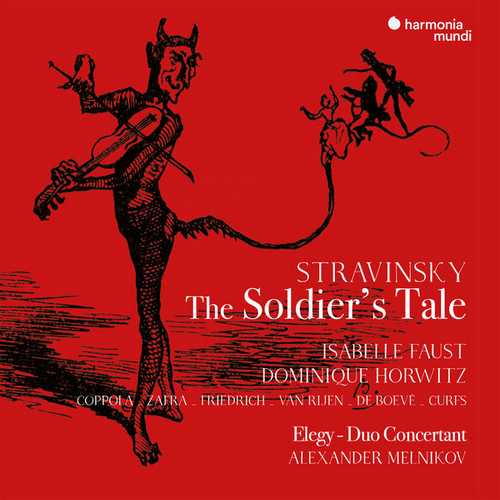 The Soldier’s Tale, Part II Scene II
20. It went off just as we thought it would
21. Little Concert

Deeply scarred by the First World War and by the upheavals of the October Revolution in his homeland, Stravinsky found, with the help of the Swiss author Ramuz, a subject that resonated perfectly with his era.

In this music theatre piece inspired by an old Russian folktale, The Deserter and the Devil, the composer of The Rite of Spring explored new paths in the last months of the First World War, which would soon lead him to a very personal form of neo-classicism.

With this English version, in which Dominique Horwitz plays all the spoken roles in masterly fashion, the musicians assembled by Isabelle Faust have taken up the challenge of performing on instruments contemporary with the premiere.

As a result, the work reveals its true personality and its immensely original colours, keen and biting.

It is coupled here with two unjustly neglected gems by its composer, to mark the Fiftieth Anniversary of his death.