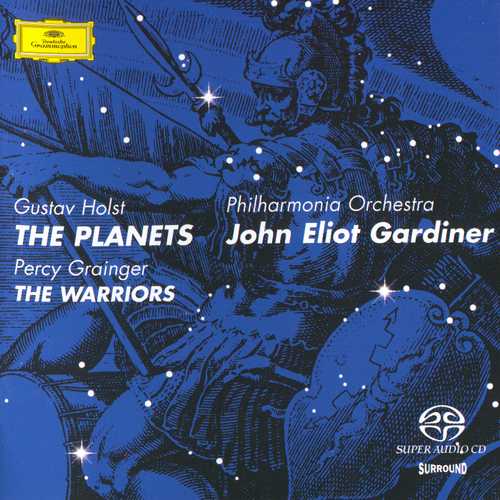 Hyperbole aside, Percy Grainger’s “The Warriors” is quite simply the most inventive, original, brilliant 20th Century orchestral composition you have never heard. Out of the few people who have heard it, half probably blow it off as kitschy fluff. The problem is that Grainger made the music so accessible (or rather so unpretentious), that few listeners realize just how rhythmically and harmonically complex “The Warriors” is. And nearly 100 years later, it’s hard to appreciate how Grainger’s use of percussion instruments was decades ahead of its time, anticipating what Stravinsky, Cage, Adams and others had yet to do.

Grainger is often compared to Ives for his interest in independent off stage brass, independent polyphony and juxtaposing tonalities and rhymes. A notable feature of “The Warriors” is that it requires two to three conductors. This is because in the section following the return of Tempo I, the entire orchestra divides into three subgroups, each playing at a different tempo. The following section features extensive double-chording where “different instrumental groups simultaneously playing different chord passages that pass through, above and below each other and are harmonically independent of each other.” I had to pull that definition since I cannot better explain it. Remarkably, it’s quite easy to miss all of this where as with Ives you cannot. Finally in Ivesian fashion, after a gigantic fanfare, the piece ends in a sudden anticlimax.

What listeners will probably find more interesting than this music theory aspect of the work, is Grainger’s percussion section, which includes xylophone, wooden marimba, glockenspiel, steel marimba (today a vibraphone), staff bells, tubular bells, celesta, and three pianos. Grainger was really the first composer to turn the percussion section into an independent section of the orchestra, making it an equal with strings, brass and winds. The way in which Grainger uses the percussion section to introduce and develop melodic and harmonic ideas was way ahead of its time. While composers in Grainger’s time would follow his lead (Stravinsky, for instance), it’s only recently that composers have begun routinely writing orchestral music that include percussion sections and music for the instruments in the manner of “The Warriors.” Just think of all the extra instruments you see on stage for contemporary compositions compared to almost anything written before 1960. And this percussion section, that resembles a gamelan orchestra, produces sounds that will remind some listeners of John Adams (and others).

Also noteworthy is the treatment of the pianos. They are neither an obbligato part nor ‘filler.’ Instead they are treated like any other instrument in the orchestra.

Oh, there’s more. In the section following the return of Tempo I, listen for the piano being played by marimba mallets striking the strings. Something, you might say, only John Cage would think of (who was born a year before Grainger began composing “The Warriors”).

On top of all of this dribble about harmonics and percussion, “The Warriors” is an exciting, lively piece of music; something we should be regularly hearing as a curtain raiser for gala concerts. And since there is so much going on in the music it, it remains fresh and exciting after dozens of listens. I never just listen to it once, but multiple times.

I believe that “The Warriors” has only been recorded a half dozen times, and I know of only three recordings in print: Hickox (Chandos), Rattle (EMI) and this one. Hickox’s recording benefits from a new critical edition of the score — Grainger was always vague about how many percussion instruments and the types of mallets — but his tempos are often too fast, failing to conjure up the grandeur Rattle and Gardiner manage to. Rattle and Gardiner are near identical in interpretation and performance, though I find things in the transition from “Dance Orgy” to “Climax” get a but mushy under Rattle’s baton. The Philharmonia Orchestra, my favorite of London’s half-dozen or so orchestras, is beyond reproach.

The recorded sound is terrific. I’ve owned the CD version of this recording for many years, only recently upgrading to the SACD due to the disc becoming mysteriously scratched. When comparing the SACD to CD, it becomes clear how DG manipulated the CD to make it sound good on low end systems. The re-mix engineer has eliminated the fake reverb, which I actually thought worked to the music’s advantage (perhaps the surround mix is significantly more reverberant). More importantly, though, is that when compared to the CD, it becomes clear that the CD spotlighted the brass and percussion, giving them an upfront perspective. This has been undone, creating a much more natural sense of depth and position of the instruments. Finally, the SACD also illuminates some compression done to the CD so that listeners wouldn’t have to adjust the volume much. The unaltered SACD stereo layer reveals that DG did an excellent job recording the Philharmonia, perfectly capturing the huge dynamic range of the music.

As for “The Planets,” I’ve never been a fan of it, but I suppose it receives a first rate performance, but I don’t expect it to displace any personal favorites.

3 thoughts on “Gardiner: Holst – The Planets, Grainger – The Warriors (SACD)”