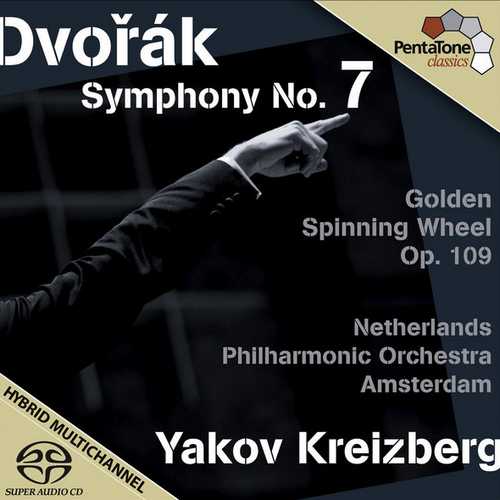 PentaTone has previously released Dvorak Symphonies 6, 8 and 9 in this series conducted by Kreizberg and all of them have received excellent reviews.

Russian-born conductor Yakov Kreizberg and the Netherlands Philharmonic Orchestra Amsterdam continue their successful survey of the late, great symphonies of Antonin Dvorák on the PentaTone label. As with other volumes, this installment includes representatives from Dvorák’s output that seem to be at odds with one another. For starters, we have the magnificent, dramatic Seventh Symphony, written very much in the more conservative, Germanic style. This is followed by one of Dvorák’s symphonic poems — The Golden Spinning Wheel, Op. 109 — which some felt contradicted the traditionalist approach of Brahms in favor of more a “programmatic” approach. In truth, listeners will notice a rather dramatic difference between these two works, but this speaks only of Dvorák’s immense flexibility. In both cases, Kreizberg and orchestra do a masterful job of capturing the unique characteristics of both compositions. The Seventh Symphony is played powerfully and with immense drive without seeming exaggerated. Balance within the orchestra is exceptionally well-controlled, allowing the important inner voices to be heard clearly even during full tutti fortissimos. The Golden Spinning Wheel finds Kreizberg delivering fine attention to detail, bringing forth the subtle nuances of the score that are integral to its relationship to the original folk story. PentaTone’s sound is clear, present, and vigorous; listeners using the multichannel SACD track will be further treated to an all-encompassing sound that puts them in the center of the orchestra.