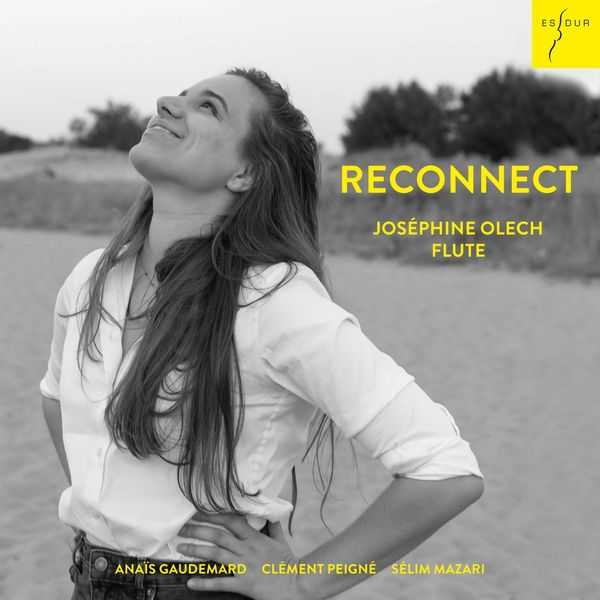 As part of winning the Fanny Mendelssohn Sponsorship Award 2020, flutist Josphine Olech will be releasing her debut album on November 20th. With RECONNECT- Nature and the Modern Man, the young Frenchwoman reflects on whether man and nature can reconcile with each other. For this, she juxtaposes pieces of music by Debussy, Takemitsu, and Crumb, inspired by nature’s sounds, with minimal music by Steve Reich and the exciting first release of Rekindle by Dutch composer Michel van der Aa.

With her virtuosity on the flute, an instrument that embodies the sounds of nature like no other, Josphine Olech not only presents a musically demanding debut but also sets a personal sign for one of the greatest challenges of her generation: the conservation of nature in a modern world.

The flute is an ancient symbol for the sounds of nature. As one of the oldest instruments originally crafted from natural materials such as bone or wood it is considered a means of communication to the elements of nature and the hereafter. With her debut RECONNECT Nature and the Modern Man, Josphine Olech uses the magic of her instrument for an exceptional kind of experiment to depict and bring to consciousness the complex relationship between man and nature. Man exploits nature while at the same time viewing it as a form of appeasement, positive energy, or, in some cultures, even a divine element. In her debut album, the flutist emphasizes this contrast between the mystical, at times even religious connection to nature and the modern age, which is characterized by technology.

For Josphine Olech, the musical sounds of nature are depicted in the works of Debussy, Takemitsu, and Crumb. Introduced by the mystical dimension of Claude Debussy’s Six pigraphes antiques, her debut album features Toru Takemitsu’s Toward the Sea III, commissioned by Greenpeace in 1981 for a campaign to protect whales, and Vox Balaenae, inspired by George Crumb’s recordings of humpback whale songs. Both works are masterpieces of the 20th century.

At the other end of the sound spectrum lies man-made modernism and technology, represented by two pieces that use electronic or minimal music processes. With Rekindle by Michel von der Aa, Josphine Olech dares to make the first recording of a flute’s combative dialogue with a playback. Steve Reich’s Vermont Counterpoint also presents a special challenge: It is a typical work of minimal music, which overlays a total of 12 voices, all played by the French flutist.

At the end of the contrasting program, Toru Takemitsu’s Le fils des toiles, based on the music of Eric Satie, is a thoughtful-meditative piece that serves as a question mark: Is man becoming aware of the need to reconnect with nature?

Josphine Olech is successful both as a soloist and as a chamber and orchestral musician. Since 2017 she has been the principal flutist of the Rotterdam Philharmonic Orchestra. Born in France in 1994, she began flute lessons at the age of seven. She completed her Bachelor and Master in Music at the Conservatoire de Paris (CNSMDP) and was trained as an orchestral musician at the Royal Concertgebouw Orchestra Academy. In addition to this year’s Fanny Mendelssohn Sponsorship Award, the musician has won numerous awards, including first prize, the audience prize, and the junior jury prize at the 2019 Carl Nielsen International Competition and third prize at the 2015 Prague Spring International Competition.