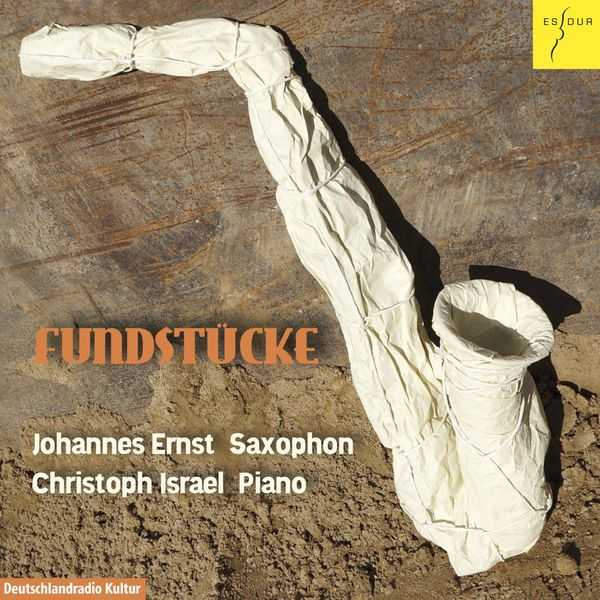 Johannes Ernst, one of the best saxophonists in Germany today, has put together a fascinating selection of ‘Fundstucke’ from the saxophone literature of the 1930s and 40s that both entertains and amuses and most certainly will be a musical discovery for the majority of listeners.

The idea for recording the ‘musical finds’ on this album germinated as long ago as 1994 when Ernst met the saxophonist Ingrid Larssen in Berlin as he was preparing to enter the Gustav Bumcke saxophone competition named after her father. He was amazed to read her reviews and learn of her popularity in the late 1930s, a period in which he previously thought the instrument had been in almost terminal decline. The then leading saxophone soloist, Sigurd Rascher, had emigrated as early as 1933; many composers who wrote music for the saxophone, including Hindemith, Krenek and Weill, had done likewise, and others such as Erwin Schulhoff and Victor Ullman were persecuted and murdered by the Nazis.

After meeting Larssen, Johannes Ernst began to search out more and more sheet music from the time and rediscovered the engaging repertoire on this disc. For a long time the fashion was to write entertaining pieces which ranged from late Romantic character pieces to up-to-date dance music – such as those by Albert Brau and Ludwig Kletsch’s The Laughing Saxophone. Much more serious are the Four Little Pieces by Hans Felix Husadel, then a professor at Berlin’s Academy of Music. Ernst and his accompanist Christoph Israel open their recital with a song from 1950, the delightful Liebeslied by Rudolf Wagner-Regeny, and finish it in playful style with the only piece from an earlier era, that mother of all virtuoso pieces, Louis Mayeur’s Grande Fantasie Brillante on themes from The Carnival of Venice.