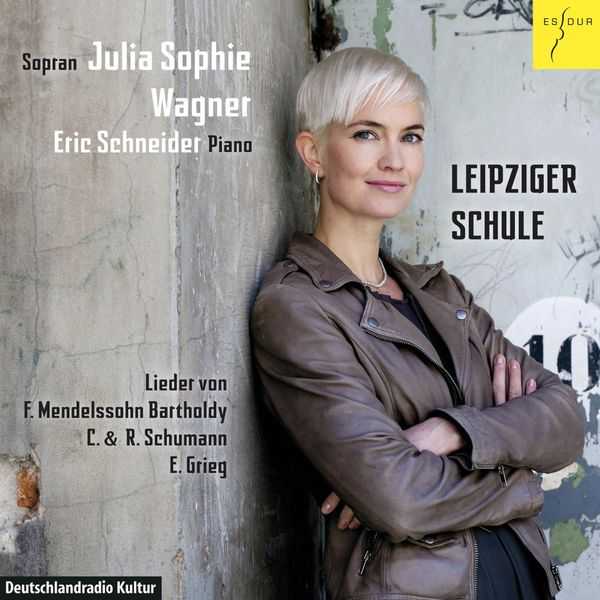 When soprano Julia Sophie Wagner was a student at the Leipzig College of Music, she was intrigued by the timetable from 1843 displayed there which listed Dr Robert Schumann and Dr Felix Mendelssohn Bartholdy as teachers at the conservatory. Now songs by Schumann and Mendelssohn are the focus of her recital with piano partner Eric Schneider.

Her special selection of songs, ‘Leipziger Schule’, relates to this common era of the composers in Leipzig and the historically unique situation which arose. It also features songs by Schumann’s wife, Clara, and by Edvard Grieg, who lived in Leipzig as a student from 1858 until 1862.

In 1843, the musical director of the Gewandhaus orchestra, Felix Mendelssohn Bartholdy, founded the first higher education institution for musicians in Germany, the Leipziger Conservatorium der Musik, and brought in renowned teachers such as the pianist Ignaz Moscheles and, for a short period, his friend Robert Schumann. Alongside his many duties, Mendelssohn was able to realise a few small works such as Songs Op.57 and 71, intended for private performance.

Robert and Clara Schumann had lived in Leipzig since their marriage in 1840. Schumann became captivated with songs at this time, composing over 170 within the course of a few months. They both composed the 1841 song cycle ‘Liebesfrühling’ based on poems by Rückert.

The most noteworthy Norwegian student of the Leipzig School was Edvard Grieg. His Opus 48, published in 1889, is the only musical setting of German Lieder which Grieg wrote before ending his studies there.

Since her debut in 2002 in Munich’s Herkulesaal, Julia Sophie Wagner has been a sought-after concert singer. She studied in Weimar and Leipzig as well as at McGill University in Montreal and quickly made he name, mainly as a specialist in the oratorios of J S Bach, soon after finishing her studies. Wagner is especially closely connected to Helmuth Rilling, the distinguished German conductor known for his Bach performances.

Eric Schneider is a renowned accompanist, collaborating with singers such as Matthias Goerne, Christine Schäfer and Anna Prohaska.