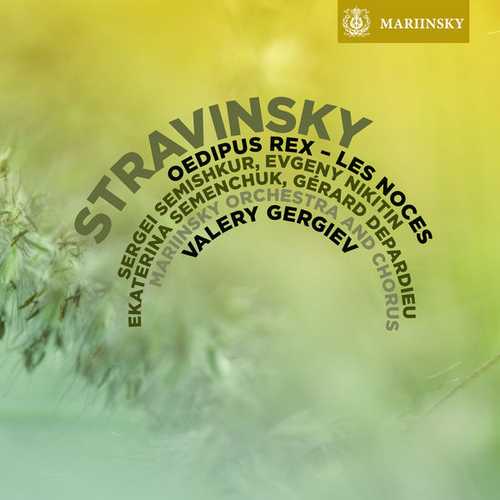 Each release from the Mariinsky label to date has featured music by some of the great Russian composers with whom the Mariinsky Theatre has enjoyed close relationships. For the label’s sixth release, Valery Gergiev turns to the music of Igor Stravinsky, a composer who grew up in St Petersburg, attending performances at the Mariinsky Theatre where his father sang. Less than four years separate the premieres of Les Noces and Oedipus Rex, yet they each represent high-points in two distinct phases of Stravinsky’s career. Although the concept of Les Noces is highly innovative – a ‘dance cantata’ – the music remains rooted in Russian folk traditions. Stravinsky dedicated the ballet to Diaghilev, whose Ballet Russes gave the première, and it marks the crowning glory of Stravinsky’s so-called ‘second Russian period’. The opera-oratorio Oedipus Rex is the first great work of Stravinsky’s neo-classical period. It features a major change in his compositional style, influenced in part by the loss of ‘Russian identity’ following his emigration. It is sung in Latin with Jean Cocteau’s original French narration spoken here by Gérard Depardieu. Valery Gergiev conducts a Stravinsky festival with the New York Philharmonic in April and May 2010, including performances of both Oedipus Rex and Les Noces. Later in May he conducts the LSO in London as well as on tour in Ireland and Germany performing music by Stravinsky, Debussy and Messiaen. Forthcoming releases from Mariinsky include the second title in Gergiev’s Grammy-nominated Shostakovich Symphony cycle followed in September by Wagner’s Parsifal. LSO Live releases Gergiev’s new recording of Rachmaninov’s Second Symphony in May, the first release in a cycle of the composer’s symphonies, and indeed the first by the composer on LSO Live.