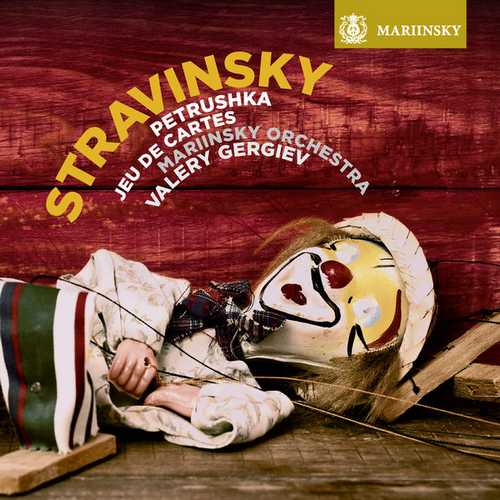 Stravinsky’s score to Petrushka is one of his most celebrated works and a product of his famous collaboration with Diaghilev that also produced The Firebird and Rite of Spring. Presented here in the composer’s original 1911 version, it tells the story of the loves and jealousies of three puppets who are brought to life during the 1830 Shrovetide Fair in Saint Petersburg. Its colourful music typifies Stravinsky’s work during the period and is characterised by the famous bitonal ‘Petrushka chord’.

A ballet in ‘three deals’, 1937’s Jeu de cartes stems from Stravinsky’s life-long enthusiasm for cards; poker in particular. A commission by Lincoln Kirstein and his newly formed American Ballet Company, it was composed during Stravinsky’s neoclassical period. The whimsical music focuses on the deceitful Joker who thinks himself unbeatable, thanks to a chameleon-like ability to become any card. During the work the Joker wages battle with other hands, but after two victorious rounds and the appearance of a third, he is vanquished by a Royal Flush of Hearts. Stravinsky regularly read La Fontaine during the composition of Jeu de cartes, chosing this quote to include in the score: ‘We must wage continual war against the wicked. Peace in itself is a fine thing, I agree, but what use can it be with enemies who do not keep their word?’

Stravinsky’s historical status in Russia today is rather ambiguous. The young Russian composer left his native country shortly before the Revolution of October 1917 to care for his wife in Switzerland and didn’t return until 1962. He was welcomed triumphantly, but almost like a composer who was foreign to his own country. In the meantime, Stravinsky had become French, then American, turning his back on Soviet politics by becoming one of the main figures in Western musical composition. Following the collapse of the communist system and the emergence of today’s Russia, Stravinsky’s music gradually became part of the repertoire of Russian orchestras, as did the work of national treasures such as Tchaikovsky or Shostakovich.

Here Valery Gergiev offers us the colourful original version of Petrushka (1911), with its large orchestra and a meter that had not yet been standardized by the subsequent revisions made by the composer. The poetry of the circus prevails here, and the accomplished virtuosos of the excellent Mariinsky Orchestra wonderfully restore the popular flavour of Stravinsky’s music.

The musical language is completely different in Playing cards, the ballet that the Russian composer wrote in the United States for dancer and choreographer George Balanchine in 1936. This came at the height of Stravinsky’s neoclassical period, that dates back to his 1920 ballet Pulcinella. Though in a way, was Petrushka not a “neoclassical” ballet too? Although the language is different, the parodic meaning, which we so often find in Stravinsky’s world, is present in both works; the citations being from popular origins in Petrushka (Wood leg for example, a song made famous by Dranem in 1908) as well as learned origins in Playing Cards, which merrily mixes The Barber of Seville by Rossini with Symphony No.5 by Beethoven and La Valse by Ravel in a pleasant potpourri.