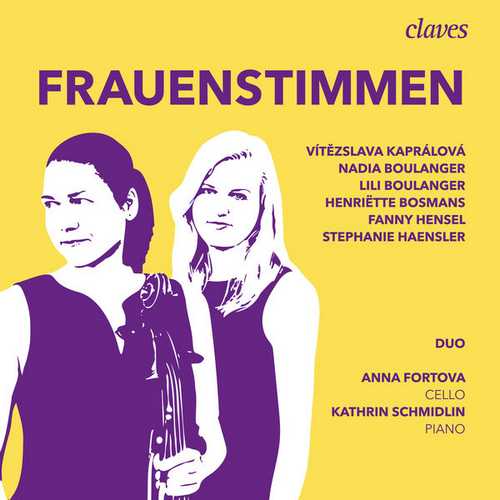 Compositions from both East and West here bring together the powerful voices of six women composers from contrasting cultures. Their music ranges from the Romantic period via Impressionism and Neoclassicism to the present. Vivid impressions alternate with absolute music, strict sonata forms with free forms full of delicate musical poetry. The standard repertoire of the 19th and 20th centuries, dominated by the male “Bs” Beethoven, Brahms, Bruckner, Bartók and others like them, is increasingly being freshened up by works either long forgotten or suppressed that were composed by women who just happen to have the same initial for their surnames, such as Grażyna Bacewicz, Agathe Backer-Grøndahl, Elsa Barraine, Amy Marcy Beach, Sylvie Bodorová, Mel Bonis, Henriëtte Bosmans, Lili and Nadia Boulanger and Joanna Bruzdowicz.

Lili Boulanger and Vítězslava Kaprálová are united by a tragic fate, for both died at the age of just 24. Vítězslava Kaprálová (1915-1940) was the daughter of Janáček’s master student Václav Kaprál. She was born in Brno, and was early on recognised as a musical “Wunderkind”. Nadia Boulanger (1887-1979) was born and died in Paris. Although she ceased composing at 25, she made her name as a composition teacher.

The Parisian composer Lili Boulanger (1893-1918) achieved overnight fame when she became the first woman to win the legendary “Grand Prix de Rome”, with her cantata Faust et Hélène. She was often sick as a child, and she died on 15 March 1918, just ten days before her role model Claude Debussy. It was in Rome in 1914 that she composed the expressive, atmospheric scenes conjured up in her D’un vieux jardin, D’un jardin clair and Cortège.

Henriëtte Hilda Bosmans (1895-1952) was born in Amsterdam, where she studied at the Conservatory and also privately with the composer Willem Pijper. She composed numerous songs to French texts, several solo works with orchestra, a String Quartet and the Sonata in A minor for cello and piano (1919). Fanny Hensel-Mendelssohn (1805-1847) was born in Hamburg, and in 1829 married the painter Wilhelm Hensel. She died in Leipzig. Her cycle Das Jahr of 1841 comprises 12 character pieces, and was composed as a reminiscence of a trip to Italy.

Stephanie Haensler was born in Baden in 1986 and studied with Robert Zimansky (violin) and Isabel Mundry (composition) at the Zurich University of the Arts. Her composition ni dónde, ni cómo is based on the text of a Chilean women’s artists’ collective, protesting about violence against women.