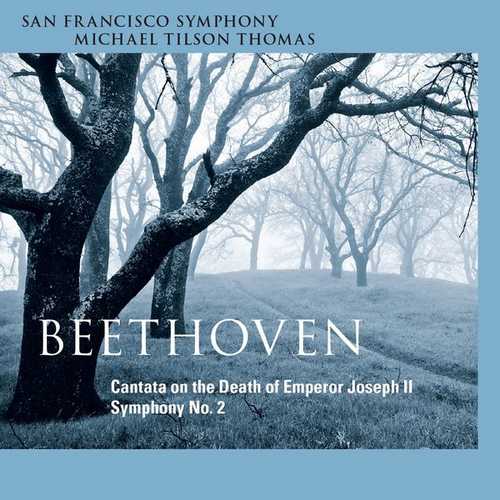 Pairing Ludwig van Beethoven’s Cantata on the Death of Emperor Joseph II with the Symphony No. 2 in D major is an unsual programming choice, but Michael Tilson Thomas and the San Francisco Symphony play both pieces to perfection. Even if there isn’t much to link them besides their early place in the composer’s output, they make an exciting album by virtue of their contrasts. The cantata was composed in 1790, but it wasn’t performed until 1884, so it has been treated as a minor work, at least in terms of the 20-year-old composer’s immaturity and small influence. However, the Symphony No. 2, written in 1802, is one of the most significant examples of Beethoven’s development , particularly of the heroic style, and its influence on Hector Berlioz and other Romantic composers was pronounced. In spite of the apparent imbalance between the works, Tilson Thomas gives them something like equal weight in his interpretations, treating the cantata with enough gravitas and expansiveness to elevate it to the symphony’s obvious level of importance. Certainly, the cantata has worthwhile moments, most notably soprano Sally Matthews’ solo with chorus, Da stiegen die Menschen an’s Licht, which was adapted later for use in the opera Leonore (the early version of Fidelio). Yet even if the cantata is a curiosity at best, the thrilling performance of the Symphony No. 2 gives this hybrid SACD high value, and makes it one of the best releases of 2013.

Beethoven’s colossal Cantata on the Death of Emperor Joseph II for chorus, soloists, and orchestra, and his playful, upbeat Second Symphony combine on this powerful live recording by 15-time Grammy Award-winning San Francisco Symphony and Chorus. Rarely performed and recorded, the gripping and profoundly moving funeral cantata, composed by a teenage Beethoven, proved a revelation during MTT’s and the Symphony’s May 2013 Beethoven Project. Presented as a premium audio hybrid SACD, this release joins the growing critically acclaimed discography of Beethoven recordings by MTT and SFS.