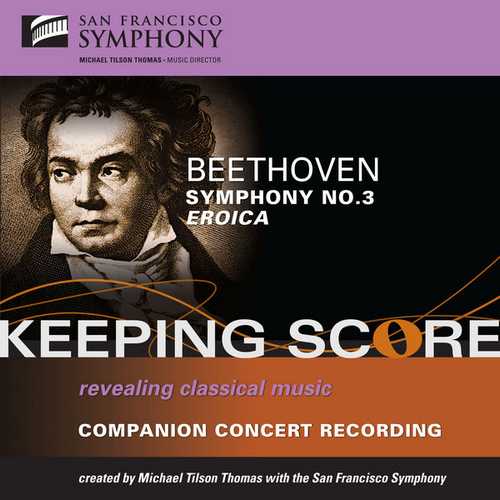 Since his first releases for DG in the early ’70s, Michael Tilson Thomas’ performances have been known for their clarity and intelligence. One always knew where one was and where one was going, and could count on hearing the score articulated cogently and lucidly along the way. Though Tilson Thomas’ readings represented the work faithfully, one could sometimes question how deeply his heart was in it, and in some performances, while the fortes and pianos were ideally balanced and the crescendos and diminuendos were perfectly calibrated, the espressivos and innigkeits went sadly unfilled.

Not so in his 2004 recording of Beethoven’s Eroica Symphony with the San Francisco Symphony. There’s no doubt that Tilson Thomas has already fully pondered and predetermined the course of his interpretation, and one can, as always, hear absolutely everything in the score. But there’s also a feeling of relentless pressure in his account, plus a passionate conviction that drives it. Tilson Thomas elicits a rougher tone from the normally suave San Francisco Symphony, and this pays dividends in the dissonant climax of the opening Allegro con brio and in the coda of the closing Allegro molto. Together, conductor and orchestra create an uncannily urgent account of Beethoven’s often-played Third Symphony.

Interestingly, in the fugue in the first half of the Finale, Tilson Thomas has opted for solo strings just prior to the passage leading to the climax. For some listeners, the effect of this will be bracing. For others, it will be disconcerting. And for all except those listeners who have never heard the work before, it will be quite surprising. While the sound could never be described as sonically seductive, it does have a raw, almost abrasive quality that suits the performance.