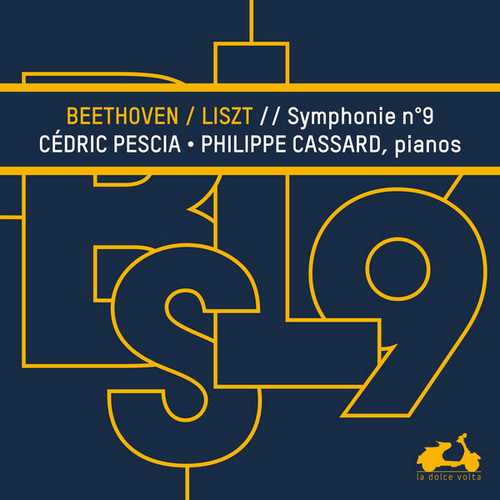 Pianists Philippe Cassard and Cédric Pescia have found an original way to commemorate Beethoven’s birth by unearthing the masterful transcription of Franz Liszt’s Ninth Symphony for two pianos. The Hungarian virtuoso performed the entire corpus solo, but the Ninth (with its soloists and final chorus) suggested that it should be performed by two pianos. At his publisher’s request, he finally – and reluctantly – recorded a version just for the one piano. This new album, however, does full justice to Franz Liszt’s original idea. Beyond the difficult Finale (a real obstacle course) and the constant search for colours, pedals, tones and balance, this release of Beethoven’s masterpiece is almost like a sonic X-ray, allowing you to appreciate just how complex and modern it is.

Cédric Pescia (on piano primo) and Philippe Cassard (on piano secondo) display their virtuosity through tremolos, jumps, octaves and repeated notes. They also sing in the sublime Adagio before embracing the great vocal mass of the Finale. While Schiller’s fraternal words are obviously missing from this scrupulously respectful arrangement, the message nevertheless becomes evident through the two musician’s performances.

While any of Liszt’s superb transcriptions of Beethoven’s first eight symphonies is a challenge for the pianist, the two-piano arrangement of the Ninth is at once spellbinding and a formidable test. This remarkable synthesis of soloists, chorus and orchestra presents a powerful structure that condenses all the fearsome difficulties of ensemble playing for the two pianists. This version by Philippe Cassard and Cédric Pescia displays extraordinary nobility, truth and grandeur, with the epic sweep ideally suited to the “Ode to Joy”.