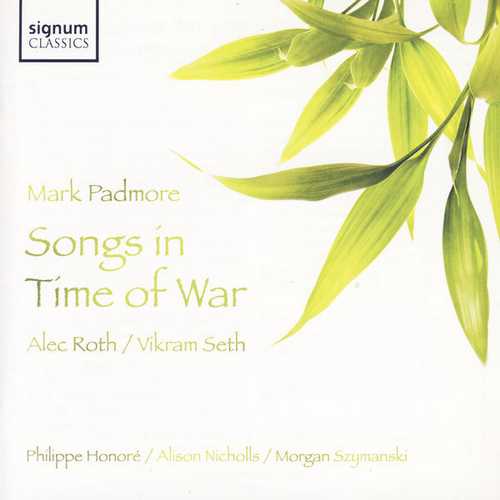 
Songs in Time of War
01. Thoughts while Travelling at Night
02. Grieving for the Young Prince
03. The Visitor
04. A Fine Lady
05. Dreaming of Li Bai
06. Moonlit Night
07. An Autumn Meditation
08. The Old Cypress Tree at the Temple of Zhu-ge Liang
09. Spring Scene in Time of War
10. Toe Wei Ba, who has Llived Away from the Court
11. Ballad of the Army Carts
12. Thoughts while Travelling at Night
13. Cancion de la Luna
14. Danza de la Luna

Born in England, of German/Irish descent, Alec Roth has been Founder and Artistic Director of the Royal Festival Hall Gamelan Programme; Music Director of the Baylis Programme, English National Opera; Composer in Association, Opera North; and Lecturer in Music, University of Edinburgh. His collaborations with the Indian writer Vikram Seth include the song cycles Romantic Residues (Bury St Edmunds Festival commission 2003) and Earth and Sky for children’s chorus, a BBC commission for the Proms 2000 season. Songs in Time of War is the first in a series of four major works commissioned jointly by the Salisbury, Chelsea and Lichfield Festivals, 2006- 2009.

The two pieces for solo guitar are part of an ongoing series of works by Alec Roth dedicated to the Mexican guitarist Morgan Szymanski: Canción de la Luna (Song of the Moon) was first performed at a Wigmore Hall recital in 2005; its companion piece, Danza de la Luna was completed in 2006 and is heard for the first time on this recording.

Chinese Gardens is a setting of poems, again by Vikram Seth, which were inspired by visits to four of the famous Ming Dynasty gardens in the Chinese city of Suzhou.