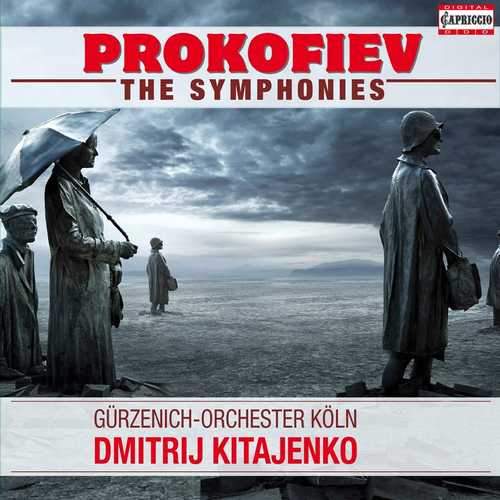 Though there have been other complete cycles of the seven symphonies of Sergey Prokofiev over the years, the most obvious comparison for this 2007 cycle with Dimitrji Kitajenko leading the Gürzenich-Orchester Köln is Valery Gergiev’s 2004 cycle with the London Symphony. Both sets feature Russian conductors with Western orchestras and include the original and the revised versions of the Fourth Symphony. But though it might initially be suspected that the charismatic Gergiev would take the prize, Kitajenko comes out on top in a direct comparison. Both are talented and experienced conductors and both seem comfortable with Prokofiev’s unique blend of warm lyricism and harsh modernism, but Kitajenko consistently goes further into the Soviet modernist’s music than Gergiev. Where Gergiev’s First Symphony is simply a cheerful pastiche, Kitajenko’s is a slyly witty send-up of Classical conventions. Where Gergiev’s Second, Third, and original Fourth are long on modernist energy and short on symphonic structure, Kitajenko’s, while no less energetic, are far more formally balanced and structurally convincing. Where Gergiev’s revised Fourth, Fifth, and Sixth are grandiloquent examples of social realism, Kitajenko’s are grandly moving examples of twentieth century symphonism. And where Gergiev treats the highly ambivalent Seventh as a light and lively piece of late-in-life whimsy, Kitajenko grants it the depth and emotional ambiguity it deserves. This is not to say that Gergiev’s cycle lacks merits. It is superbly played and conducted and Philips’ digital recording is big, brawny, and colorful. But Kitajenko’s cycle seems to speak with more authority on more profound issues, and Phoenix Edition’s digital sound is cleaner, clearer and detailed. Though committed Prokofiev enthusiasts will want to hear both, they may find themselves more often returning to Kitajenko’s cycle.

Prokofiev enjoyed relative freedom in the symphonic medium. Symphonies allowed him to create dancing rhythms that need not be strictly danceable, as well as singing melodies beyond the limitations of human vocal chords. He worked on symphonies – apart from earlier, unrealized student works – from 1916 until 1952, the year before his death.

A complete set of Prokofiev’s symphonies provides a satisfyingly all-encompassing look at the composer’s creativity throughout the years of his mastery.