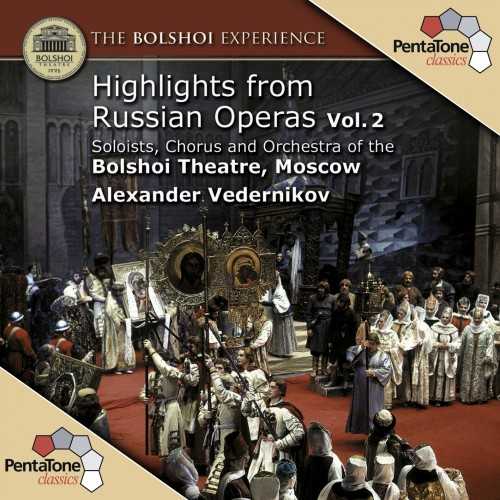 Nikolai Rimsky-Korsakov:
From “Legend of the invisible city of Kitezh and the Maiden Fevroniya”
04. Prelude: A hymn to nature
05. The battle near the Kerzhenets River

In 1776, Prince Pyotr Urusov and his English partner, Michael Maddox, set up a theatre company in Moscow after obtain- ing the imperial permission of the Empress, Catherine II. The Bolshoi Theatre of Russia traces its history back to this date: Mos- cow’s first permanent company and first professional opera-house was, in time, to become the country’s leading theatre. At the time, the Urusov theatre put on productions of opera, ballet and drama, and expected its artists to perform roles in all these genres: and to this day, the artists of the Bolshoi Theatre are also trained to act, as well as to sing and dance. The same principles underline the performance style of the Theatre’s orchestra. In addition to the virtuoso instrumental skills, its members are required to participate on an equal basis in the performance, in accord- ance with the spirit of the production.