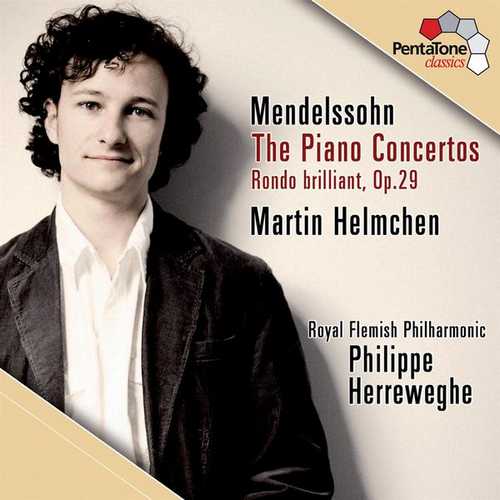 All Helmchen’s recordings for the PentaTone label have been award winners. The romantic and virtuoso piano concertos by Mendelssohn never became as popular as his violin concertos but are of just as high a calibre. Helmchen regularly works with Philippe Herreweghe and this collaboration has resulted in a very special album.

Mendelssohn did not set out to write his first piano concerto until the age of 23, relatively late considering the composer’s short lifetime. He had reservations about his ability to produce a concerto that was more than just pyrotechnic bravura. Indeed, the first concerto is filled with Mendelssohn’s trademark mercurial filigree and brisk, busy passages, but he also achieves a wonderful sense of stillness and serenity in the central Andante that contrasts beautifully with the outer movements. The Second Concerto came about some five years later and already Mendelssohn’s growth as a composer can be heard with the concerto’s more serious, refined, and less showy nature. Performing these two energizing but sometimes overlooked concertos, as well as the Op. 29 Rondo brillant, is pianist Martin Helmchen and the Royal Flemish Philharmonic under Philippe Herreweghe. Apart from Helmchen’s commanding technical skills and clear musical direction, and the RFP’s sensitive but authoritative accompaniment, what makes this album an especially successful one is tone of the piano itself and PentaTone’s recorded sound quality. Helmchen’s piano is a tiny bit bright, and even a little dry, which actually serves Mendelssohn quite well; every note comes out crystal clear, even in the busiest, most complicated passages. PentaTone’s highly detailed SACD layer gives even more definition to the piano and allows the orchestra to be punchy and vivacious without obscuring Helmchen in the slightest.