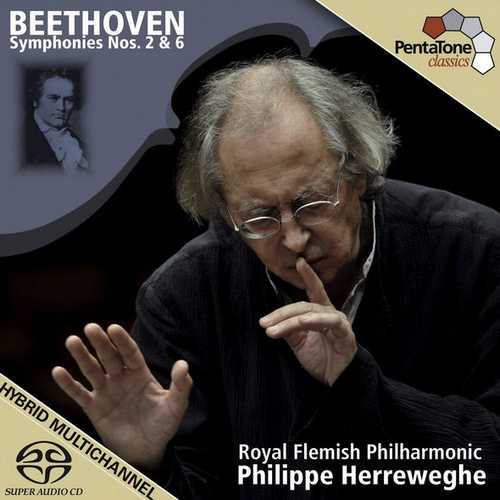 Herreweghe is a specialist in Renaissance and Baroque Music and has received many awards. He is recording a series of the works of Beethoven with Pentatone and his CDs of Symphonies 1 & 3 and 5 & 8 have previously been released.

Philippe Herreweghe’s performances of Beethoven’s Second and Sixth symphonies with the Royal Flemish Philharmonic are fast, robust, and above all, vital. The Second here is much bigger than the standard-issue, with a strong, almost monumental power in the Adagio molto and Larghetto, and with unstoppable energy in the Allegro con brio and Allegro molto. The Sixth is even more distinct from run-of-the-mill Pastorals — faster, lighter, and especially, more lyrical. The opening Allegro, ma non troppo is almost an Allegro con brio and the closing Allegretto nearly an Allegro, yet the playing of the elegant Flemish orchestra, particularly the delightfully characterful woodwinds, does not sound breathless, but graceful and natural. Listeners looking for something different in these very familiar works should try these performances, captured in amazingly life-like super-audio sound.