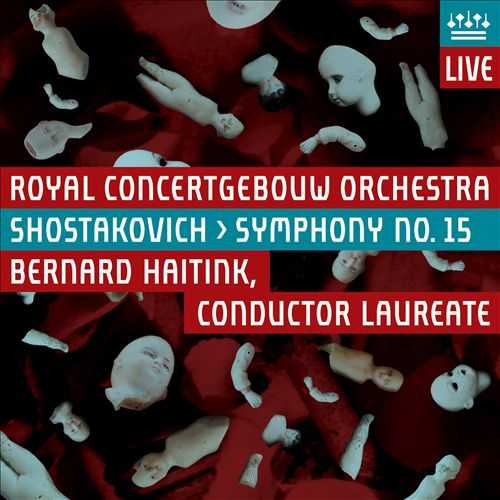 The concerts given by Bernard Haitink in his capacity as honorary conductor of the Royal Concertgebouw Orchestra are considered high points of the Amsterdam concert season. In March 2010, Haitink made a guest appearance with the orchestra to conduct Shostakovich s Fifteenth Symphony. That concert performance is presented here on RCO Live in Super Audio CD format for the pleasure of music lovers everywhere. Haitink s Shostakovich cycle from the 1970s has long been acclaimed as one of the finest made, and this new version will only add to the conductor s reputation as a specialist in this repertoire.

Bernard Haitink is hardly a newcomer to the symphonies of Dmitri Shostakovich and it is refreshing to hear a live performance extracted from of his series of evenings with the Concertgebouw Orchestra in 2010. The performance is astonishingly fine, especially given the fact that it was from a live performance origin – a state often flawed by bleeps and coughs. For those who treasure the output of the troubled Shostakovich this survey of life will have special meaning: the commitment between the conductor and the orchestra is sure and of one mind.

Shostakovich’s final symphony, the Symphony No. 15, was composed over a three month period in 1971 after a lifetime’s struggle to make music despite the machinations of Soviet politics. In a country cottage near Leningrad, Shostakovich found the peace and quiet he needed to finish the symphony, writing in the morning, walking and lunching with a friend, before taking a glass of vodka with the news media. He was 65; he’d had had a heart attack, his health was poor, and the 15th Symphony is understandably overshadowed by intimations of mortality. The notes included with the set describe the symphony `as “a cradle-to grave work”: beginning with youthful élan, concluding like a last breath. Some kind of symphonic last testimony, then? It’s certainly Shostakovich in enigmatic and reflective mode, looking back at his own musical history with quotations from earlier scores, as well as Wagner’s Tristan and the Ring, whiffs of such terminal touchstones as Tchaikovsky’s 5th, Mahler’s 9th, and Strauss’ `A Hero’s Life’; and most obviously in the first movement, quirky quotations from Rossini’s William Tell.’

As one critic phrased it, `Bernard Haitink’ and the RCO at their most brilliant and exhilarating best delivering a performance that is nothing short of breath-taking, full of high drama and unbearable tension as Haitink pits all his mental resources into making sense of this most elusive of Shostakovich’s symphonies. The result is simply outstanding, in my humblest of opinions there has not been a better 15th on disc which is probably the same as saying this is arguably the best 15th ever set down on disc.’

The critics all seem to agree that this is close to a definitive performance. But it is up to the individual listener to make that decision. For this listener the sense of finality as the symphony closes is one of those moments that gives the feeling that despite the frequent performances of this major work, this sound is like a fresh first, emotional experience.