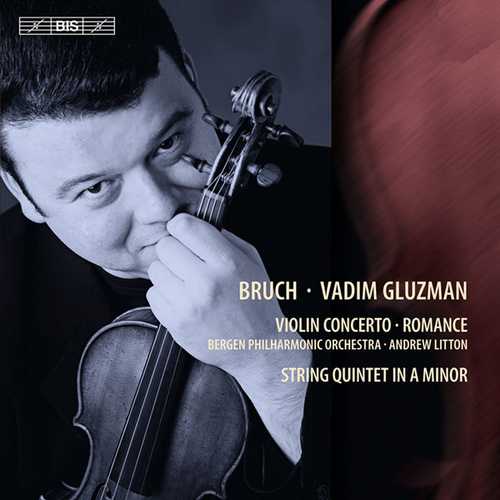 Following on from his recordings of the concertos by Tchaikovsky (‘without doubt one of the work’s finest recordings in recent years’, BBC Music Magazine), Barber and Korngold, The virtuosic violinist Vadim Gluzman here performs a giant of the violin repertoire: Max Bruch’s Violin Concerto No.1.

Throughout his 82-year life, Bruch remained true to the musical ideals of his youth, formed by Schubert, Mendelssohn, Schumann and German folk songs. His Violin Concerto No. 1 was a spectacular success from its first performance in 1868, and soon won over audiences both in Germany and abroad.

Gluzman also performs the violin version of the Romance in F major, Op.85, composed by Bruch for viola and orchestra. The composer also made an arrangement for violin and piano, and it is this violin part which Gluzman performs to the original orchestral score.

Closing the programme is the String Quintet in A minor in which Gluzman is joined by four eminent string players: Sandis Šteinbergs, Maxim Rysanov, Ilze Klava and Reinis Birznieks. Composed in 1918, the youthful energy, dramatic instinct and playful exuberance of the quintet equally belies the fact that it was composed by a man in his eightieth year.

Gluzman is supported by the eminent Bergen Philharmonic Orchestra and its music director Andrew Litton.

The immense popularity of his Violin Concerto No. 1 in G minor, both during his lifetime and into modern times, turned out to be almost something of a curse for composer Max Bruch. The violin concerto, his first foray into the concerto genre, was helped along by none other than Joseph Joachim. So widespread was the success of the concerto that Bruch found it difficult if not impossible to compose subsequent instrumental works that could stand against it. In the almost six decades between the completion of the violin concerto and Bruch’s death, few works were even to come close. In addition to the concerto, this BIS album attempts to shed new light on some of his more neglected compositions, including the Op. 85 Romance in F major and the String Quintet in A minor, one of the composer’s final works. Violinist Vadim Gluzman joins the Bergen Philharmonic Orchestra under Andrew Litton for an exciting, dynamic performance of the concerto. Gluzman’s playing is vibrant and energetic; his tone is both sumptuously warm and assertively powerful. Litton’s orchestral leadership is equally enthralling. He does not simply race through the considerable orchestral tuttis, but adds shape, color, and interest throughout. Gluzman joins four other colleagues for a rare reading of the string quintet. Though written well into the 20th century, the quintet could just as well have been written in the mid-1800s; Bruch’s commitment to Romantic ideals remained resolute right up to the end. The performance here is just as vivacious and edgy as the concerto, casting the little-heard work in its best possible light.