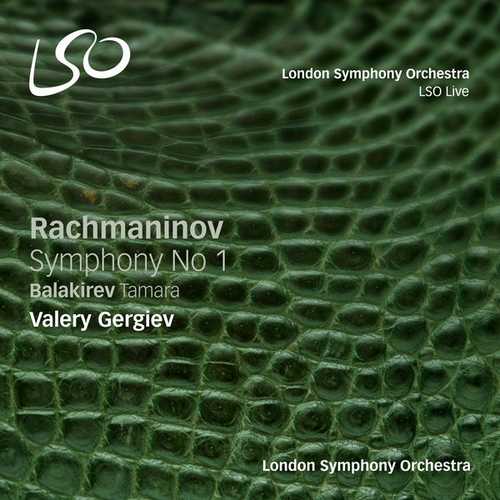 Rachmaninov’s music reveals Gergiev at his very best and this LSO Live cycle of the complete symphonies has received widespread acclaim. The LSO are clearly at ease with these challenging works, earning a Gramophone Editor’s Choice with Symphony No. 2 for its “warm and irresistibly propulsive [performance] …‘Andrew Marriner’s almost introverted account of the great clarinet solo is beautifully accompanied, a real heart-stopper.”

Symphony No 3, coupled with Balakirev’s Russia, was also well-reviewed by critics and received featured airplay on BBC Radio 3 along with 5* reviews from both BBC Music Magazine and Classic FM. Completing the cycle, Gergiev conducts Symphony No. 1, coupled with another Russian masterpiece, Balakirev’s ‘Tamara’.

Rachmaninov’s First Symphony has a somewhat chequered history, in no small part due to a, quite possibly, drunk Glazunov conducting the first performance. However, it is now seen as a vibrant depiction of Russian civilisation and culture, recognised for its fluid longing and expressive features.

Balakirev was a member of Russia’s ‘Mighty Handful’, and ‘Tamara’ is widely considered his greatest work – a sensuous and melodic work influenced by exotic and oriental culture, popular in the music of 19th-century Russia. Aside from Rachmaninov’s symphonies, Gergiev and the LSO have also recorded the composer’s popular ‘Symphonic Dances’ for LSO Live. Charting at #7 in the UK Specialist Classical Charts, it makes a beautiful addition to the cycle: “How beautifully blended and responsive they [LSO] are under Gergiev’s direction … there is much to enjoy here, not least an orchestra that is at the very top of its game under its charismatic conductor.” International Record Review