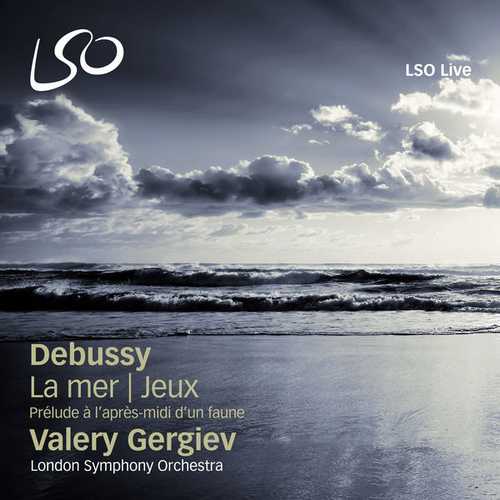 Valery Gergiev has been performing Debussy’s music regularly with the LSO since he became Principal Conductor of the orchestra in 2007. For his latest LSO Live release he records three of Debussy’s most wellknown works for the first time, including a sensational performance of La mer. One of the 20th century’s most innovative and influential composers, Debussy was a ‘musical impressionist’, although it was a term he disliked. Despite running to little over ten minutes in duration, the sublime Prélude à l’après-midi d’un faune is widely regarded as one of the important and revolutionary of musical works. La mer was completed ten years later whilst Debussy was living in Eastbourne in Sussex and is a spectacular orchestral showpiece. Jeux, one of Debussy’s final orchestral works, was written for Diaghilev and the Ballets Russes.

Valery Gergiev’s recent releases have included acclaimed recordings of Mahler’s Symphony No 5 and music by Debussy’s French contemporary Ravel. Gergiev and the LSO perform in London and Paris in March before embarking on a European tour in May, visiting Germany, Switzerland and the Netherlands.