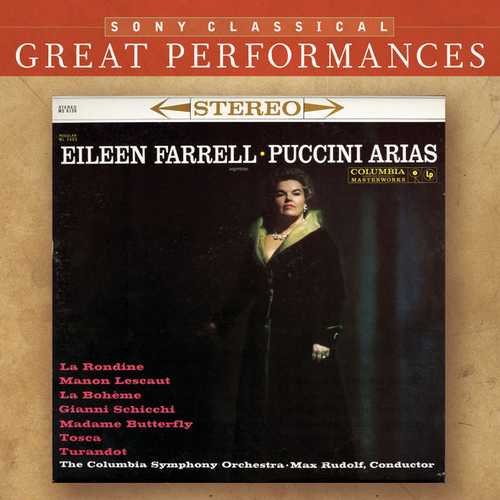 Although it might not be readily apparent in the Eileen Farrell bin at your local record store, if there is one, she has been on plenty of CDs, usually in a supporting role rather than as the star. Late in life she recorded a whole series of discs for Reference Recordings, and individual tracks by Farrell are often used in themed compilations of various kinds. But anyone who experienced Farrell in the days of LPs would have thought of her as a Columbia Masterworks artist primarily, and among record companies CBS’ successor Sony Classical seems about the least enthusiastic in making her back catalog available. In the whole of the CD era, only two Eileen Farrell re-releases have appeared under the Sony banner: I’ve Got a Right to Sing the Blues, which highlights her awesome facility with pop material, and the Masterworks Heritage issue Eileen Farrell Sings Verdi.

Eileen Farrell: Puccini Arias and Others in the Great Tradition represents Sony’s third go-round with Farrell’s back catalog, and we’ll take it — hopefully the third time will prove the charm, as everything on here is just splendid. It’s funny how devotees of historical sopranos forgive such past singers for quirks that would normally cause them to look down the ends of their noses at a present-day singer exhibiting vocal irregularities in concert — we forgive Maria Callas for her cottony chest voice and tolerate Leyla Gencer’s loopiness. However, Farrell simply doesn’t have these kinds of defects; her singing is pure, always flawlessly in tune, rich with characterization, and very, very powerful. Farrell practically pins the listener against the back wall with sheer emotive energy and volume in her rendering of the aria “In questa reggia” from Turandot heard here.