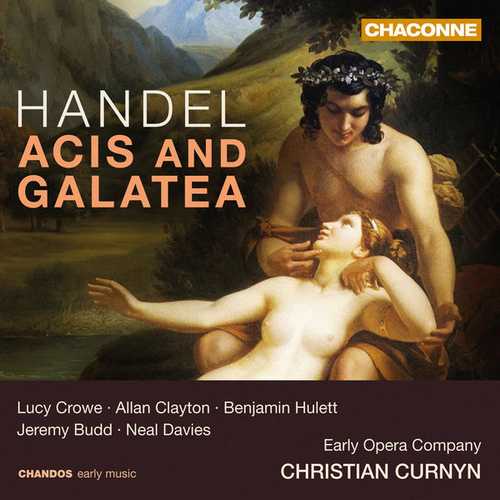 The award-winning Early Opera Company under the direction of founder Christian Curnyn celebrates the 300th anniversary of the premiere of one of Handel’s most sublime creations: Acis and Galatea.

This unique interpretation is performed as Handel himself specified in the manuscript: supported by fourteen period instruments, the outstanding cast of singers takes on the solo parts as well as the magnificent choruses. This is Handel writing at his highest levels of intimacy and intensity; the music superbly supports the libretto’s evocative portrayal of the story, simultaneously restrained, economical, and deeply moving.

It is exquisite music, and has been the Early Opera Company’s most frequently requested and played performance over the last few years. With the addition of Baroque experts Lucy Crowe and Benjamin Hulett, previously featured on the award winning Chandos recording of Serse, this album in surround sound is not only an extraordinary achievement for the company but a must-have for all early music lovers.

This isn’t an opera, strictly speaking; this Acis and Galatea by Handel, most likely dating from 1718, is much more a part of the very English genre of the “masque”, or pastoral divertimento. That said, its hour-and-a-half running time is redolent of a lot of operas… It seems that Handel wrote it for a rich private patron, in those politically turbulent days when the Royal Theatre had more bad days than good; James Brydge, the count of Carnarvon, had assembled a little troupe of singers and musicians at his manor, as well as a choir, which allowed him to offer purely private musical entertainments of high quality. Of course, the work is sung in English; the orchestration, which is very original, calls for inter alia a soprano recorder for the songbirds; and it unfurls a number of theatrical “tricks” to highlight the personalities of the various characters. Twenty years later, Handel would revise his work for public performances in London, but this is a recording of the 1718 original. Elegance, sensuality, a strong dose of humour in spite of the often-sombre subject matter: this is the best of Handel, and it should be noted that the composer used almost none of his normal “recycling”: apart from an aria, all the music here is original, and was not re-used in any other works. Acis and Galatea was one of Handel’s most-performed works in his own lifetime, which rather prevented him from re-using any of the tunes too often, as he might have been able to do with a lesser-known piece. The Early Opera Company conducted by Christian Curnyn proves here that private lyrical enterprises, supported by crowdfunding and generous subscriptions from patrons have got a long and happy future ahead of them still.