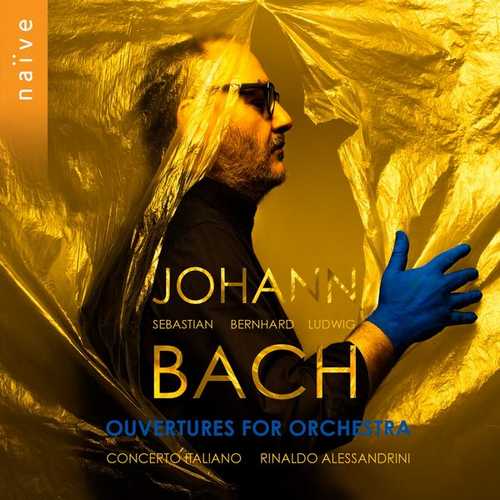 For several decades, as solo harpsichordist and director of his ensemble Concerto Italiano, Rinaldo Alessandrini has been exploring not just the Italian repertoire that he is so passionate about but also the works of Bach – as in his benchmark recording of the Brandenburg Concertos in 2005. In this new recording, Alessandrini has mounted a challenge to all currently available recordings of those four Orchestral Suites that Bach called ‘Overtures’, after their imposing opening movements. It’s uncertain when these dance suites were composed or where they were first performed but they were certainly played in Leipzig at the time Bach was directing its celebrated Collegium Musicum.

Here Alessandrini has once again sifted all available sources, putting the composer’s entire output under the microscope to identify the most authentic details of style and orchestration. The result is a subtle balance between Bach’s intricate contrapuntal writing and the spontaneity of his dances, with their French and Italian influences. Together with these majestic, festive, radiant works by JS Bach, Concerto Italiano presents two Overtures in the same instrumental mould by Johann Bernhard and Johann Ludwig Bach – two composer cousins with whom Johann Sebastian enjoyed lifelong ties of mutual friendship and esteem. During his Leipzig years he had their Overtures copied out, so he could perform them with the Collegium Musicum. Here then is a welcome opportunity to hear these two superb orchestral pieces in the contemporary context of Bach’s own music.

Johann Sebastian Bach’s four Overtures (or Orchestral Suites) remain somewhat of a mystery as the exact date and circumstances of their composition is still unknown. Just like his Brandenburg Concertos, they are intended for a variable number of musicians and all four of them consist of a dance suite preceded by a three-part opening movement, in the middle of which is a brilliantly fast and skilful fugal section.

The music in this double-disc album by Rinaldo Alessandrini is twice as exciting as it also explores the Overtures composed by two cousins of Johann Sebastian, namely Johann Bernhard (1676-1749) and Johann Ludwig (1677-1731). He held their music in such high esteem that he even played it during the Leipzig Collegia Musica’s concert in Gottfried Zimmermann’s café, where a weekly concert took place with either himself or Telemann conducting, although it was later destroyed during air-raids. Indeed, their music was remarkable and it certainly shouldn’t be overshadowed in light of the success of their younger cousin.

When JS Bach composed these Overtures, it would seem that he was influenced by French music given that a didactic work entitled Musical Composition according to the French method was published in Germany in 1682 outlining an overture that precedes a series of dance suites. This particular style of composition would later become symbolic of the “alla francese” style that was soon adopted by musicians all across Europe. A most welcome album where music and didactics go hand-in-hand.