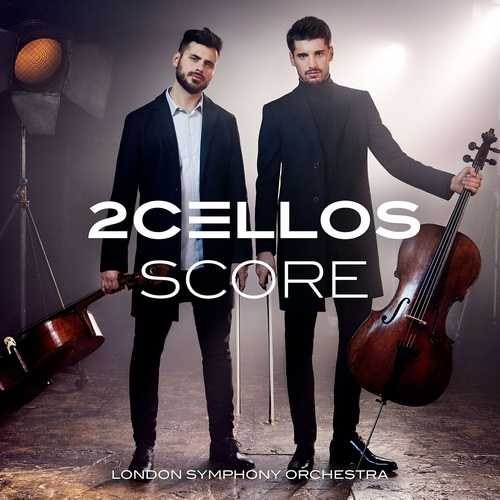 
01. Ramin Djawadi – Medley From Game of Thrones
02. Enya, Roma Ryan, Nicky Ryan, Howard Shore – May It Be From The Lord Of The Rings: The Fellowship Of The Ring
03. James Horner – For The Love Of A Princess From Braveheart
04. Francis Lai, Carl Sigman – Love Story From Love Story
05. Ennio Morricone, Andrea Morricone – Cinema Paradiso From Cinema Paradiso
06. Henry Mancini, Johnny Mercer – Moon River From Breakfast At Tiffany’s
07. Nino Rota – Love Theme from The Godfather From The Godfather
08. James Horner, Will Jennings – My Heart Will Go On From Titanic
09. Hans Zimmer – Theme From Rain Man
10. Stanley Myers – Cavatina From The Deer Hunter
11. Ennio Morricone – Maléna From Malèna
12. John Williams – Theme From Schindler’s List
13. Vangelis – Titles From Chariots of Fire
14. Hans Zimmer, Lisa Gerrard, Klaus Badelt – Now We Are Free From Gladiator

2CELLOS, music’s most electric and dynamic instrumental duo, go to the movies for their new album Score. Bringing 2CELLOS’ game-changing sound and style to the most popular melodies ever written for classic and contemporary movies and television, Score finds Croatian cellists Luka Sulic and Stjepan Hauser exploring a more traditional sound-world. Joining them here to provide the ideal aural backdrop to their virtuosity is the London Symphony Orchestra, with conductor/arranger Robin Smith at the helm. Sulic and Hauser also co-produced Score with Nick Patrick (Jackie Evancho, Il Divo, Placido Domingo).

On Score, themes that drove some of the biggest block-busters in film and television history are featured in fresh new treatments including an arrangement of Ramin Djawadi’s melodies that score Game of Thrones, Oscar-winning themes from James Horner’s Titanic (“My Heart Will Go On”), John Williams’ Schindler’s List and Vangelis’s Chariots of Fire, as well as “For the Love of a Princess” from Braveheart (also by Horner); “May It Be” from The Lord of the Rings: The Fellowship of the Ring (introduced in the film by Enya); and the inspiring “Now We Are Free” from Gladiator, by the film’s composer Hans Zimmer, Lisa Gerrard and Klaus Badelt.

The vocal beauty of the cello’s sound is also a perfect match for a brace of romantic themes, which include the Henry Mancini/Johnny Mercer song “Moon River” from Breakfast at Tiffany’s; Ennio Morricone’s beautiful themes for Cinema Paradiso and Malena; Nino Rota’s love theme for The Godfather; Francis Lai’s Oscar-winning theme from Love Story; Hans Zimmer’s theme from Rain Man; and Stanley Myers’ haunting “Cantilena” heard in The Deer Hunter.

2CELLOS have forged a signature style that breaks down the boundaries between genres of music, from classical and film music to pop and rock. As impressive when playing Bach and Vivaldi as they are when rocking out, Sulic and Hauser know no limits when it comes to performing live. They have sold out shows around the globe and also performed with Sir Elton John as part of his band, as well as opening his shows to rapturous acclaim. 2CELLOS are the first instrumentalists to be featured on Glee. They have also appeared multiple times on The Today Show and The Ellen DeGeneres Show in addition to The Tonight Show, The Bachelor Live Wedding Special among others.