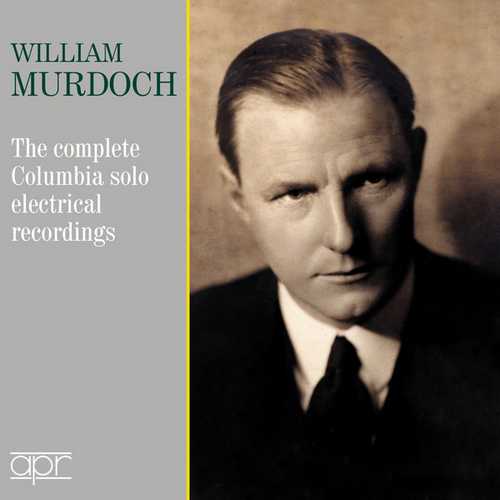 Many of these recordings date from the earliest days of electrical recording which only beganin 1925. Although the system was perfected within a very few years and ultimately was a vastimprovement over the previous ‘acoustic’ process, some of the discs from 1925 and 1926 seemto have been recorded at an excessively low level, resulting in a weak signal that can becomeseriously compromised by the inevitable surface noise of shellac discs. This, coupled with thedifficulty of finding pristine copies of the original discs, has meant that several sides are noisierthan one would have hoped. In addition, Murdoch’s first electrical session of 23 November 1925suffers from both a ‘boxy’ acoustic and an out-of-tune piano. In the interests of preserving theserare discs it seems better to include everything rather than just the best of them and I hopecollectors can hear past these defects and enjoy the very musical playing of this almost forgottenartist.

Australian pianist William Murdoch (1888–1942) is almost forgotten today but was a major UK Columbia recording artist in the 1920s. A consummate musician, he was known as a chamber player as much as a soloist, as evidenced by many recordings, but was also the first pianist to record Beethoven’s 3rd piano concerto (acoustically in 1925). Amongst his solo recordings, pride of place must go to the two Beethoven sonatas which burst with energy and passion while never descending into superficiality. A little known and fascinating part of his legacy is his recording of the eight test pieces written for the National Piano Competition of 1928 organized by the Daily Express. This unique event was open to pianists of all abilities from beginner to advanced and the specially commissioned pieces, by contemporary British composers, reflected these different levels. Murdoch’s recordings originally came with spoken commentaries on interpretation.