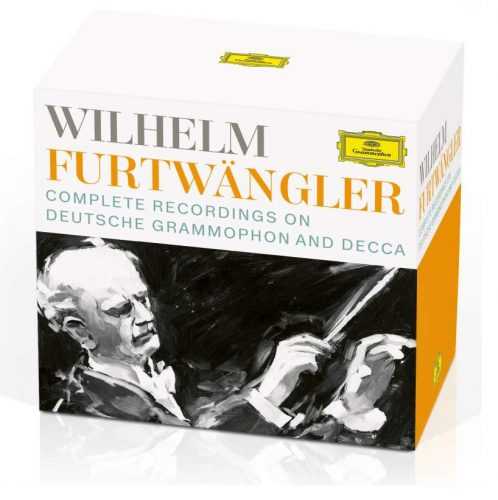 Cancel A Day For This One!

This is one of those magical sets of CDs that cause you to cancel everything you had planned one day in order for you to sit between the speakers listening to hours and hours of glorious music making. It came out with but a whimper, as all new Furtwangler sets curiously do, but here it is. From beginning to end, all 34 discs, are splendid. The sound from beginning to end, with very few exceptions, improved from earlier DG releases and many ‘live’ recordings, as any Furtwangler fans and scholars will tell you, are pick of the crop. I have to say I am in Furtwangler heaven. What a pleasure this Furtwangler collection is! Included is a very nice booklet with pictures scattered here and there of the original album covers, back and front, of the DG studio recordings. Someone at DG was doing their homework. An excellent presentation. Each disc is enclosed in a cardboard ‘sleeve’ that slides out easily with a touch of your finger. The ‘sleeves’ are color-coded for the various selections such as orange for The Early Recordings, bright orange for The War Years, almost a brownish color for The Post War Recordings, etc. Again, someone was doing their homework. The design and coloring of these ‘sleeves’ remind me very much of the old budget Columbia Odyssey albums for some reason. That was my first thought when I saw them. The entire collection is in a sturdy cardboard box with slide-off lid. The discs are very well protected from the elements. There is also two bonus discs featuring an excellent 1926 recording of Beethoven’s Fifth Symphony and Furtwangler ‘speaking’ about music. The second bonus disc is a complete staged version of DON GIOVANNI from the 1954 Salzburg Festival production directed by Paul Czinner. There is a lot of mystery surrounding this production regarding who conducted what but it is Furtwangler in the pit at the very beginning. I know where Furtwangler got the nickname a few were using in the past to describe his conducting technique as ‘a cadaver on a stick.’ Wasn’t me folks! Go for it and cancel a day of your choice for pure listening pleasure.

This is one of the most essential purchases for any lover of orchestral music and great conducting. Furtwängler was the greatest of all recorded conductors in my opinion. Despite the occasional wayward tempo or attack, he entered the spirit of the music more deeply than any other conductor. Comparisons with his great opposite, Toscanini, are of no value. Their ethos was completely different, and I personally respond much more to Furtwängler than Toscanini. This box set is staggering in its scope. Most of the recordings are live, and it is live performances that always showed Furtwängler at his best. He avoided studio recordings, though there are a few in this box set.

Many or most of the recordings have been available before, especially in four smaller box sets issued by DGG in previous decades. I compared two Bruckner symphonies with those earlier releases and there is a definite improvement in sound in this comprehensive box set – better definition of the various layers of orchestral instruments and generally a fuller sound. The recordings are mono, of course. No one conducted Beethoven, Brahms and Bruckner better than Furtwängler. There are other composers included, but those three are the heart and soul of this box set, just as they were the heart and soul of his career. Buy it even if you have many of the previous DGG releases. This is one of the most essential box sets that I have bought.

There is one negative to this release which I feel compelled to identify. It’s the essay by Norman Lebrecht. It seems that he wrote in English, because the German is a translation. I don’t know who this gentleman is, but he says nothing about the music or the conductor’s art. He is more interested in renewing old attacks on Furtwängler. He clearly aims to identify Furtwängler more closely with the Nazis than is warranted. And he even indulges in some cheap stuff more worthy of a gossip column than an essay in a DGG box set. Do we really need to read that Furtwängler demanded sex before many of his concerts and sent out for women to be brought to him? I’m surprised that DGG allowed such a cheap essay to be included. Furtwängler was criticised by Toscanini and others – like Schnabel, quoted by Lebrecht here – for not leaving Germany during the Nazi era. Right or wrong, Furtwängler chose to stay in Germany. Unlike Toscanini who was able to escape to a comfortable existence in the US where millions of fans adored him, Furtwängler had no home but Germany. Was he naive? Perhaps, but his love of music, especially the music of the great German composers, came first. Lebrecht chooses to take the low road in writing about Furtwängler. It’s the only negative that I can say about this amazing release, and of course it takes nothing away from the value of this box set.