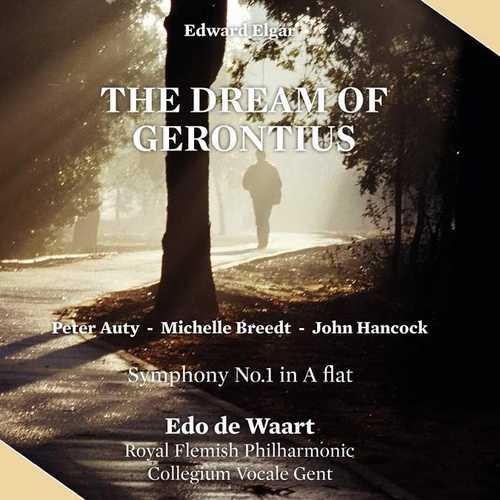 Edward Elgar’s The Dream of Gerontius is not everyone’s cup of tea, with its gigantism and its massive recitatives of Catholic doctrine. But it hangs on, and from the beginning it has had adherents beyond Britain. The work tells the story of a soul’s passage into death. Elgar objected to the term oratorio, and he was right: it’s more of a giant cantata. The protagonist, Gerontius, is an ordinary individual; he is sung by a tenor, and there are solo parts for an angel (a mezzo-soprano), a priest (a baritone), and an Angel of Agony (a bass, here also sung by baritone John Hancock). The choir fills various roles, including visions of angelic harmony, souls in purgatory, demons, and friends attending the dying man. This is perhaps an ideal performance. The Dream of Gerontius is a work much-beloved by choral societies, for the choir is given a lot to do, and a lot of different kinds of things to do. The beefed-up Collegium Vocale Gent is not the first choir you’d pick for this work, but they inhabit the various characters convincingly. Veteran conductor Edo de Waart, who has also championed the work in the U.S. with the Milwaukee Symphony Orchestra, provides solid support in all the details with the Royal Flemish Philharmonic. The three soloists are very strong: they get the fact that for all its size, the work is actually personal in tone, and tenor Peter Auty avoids heroic mannerisms. The performance of the Symphony No. 1 that rounds out the second disc is clean and broadly appealing. But the real stars here are the engineers from the PentaTone label in the Netherlands. The album was auditioned on a good conventional stereo, where it revealed impressive spatial separation of the huge forces, and previously unnoticed levels of detail. With super audio-capable equipment, the album promises to give The Dream of Gerontius the environment it has been waiting for.