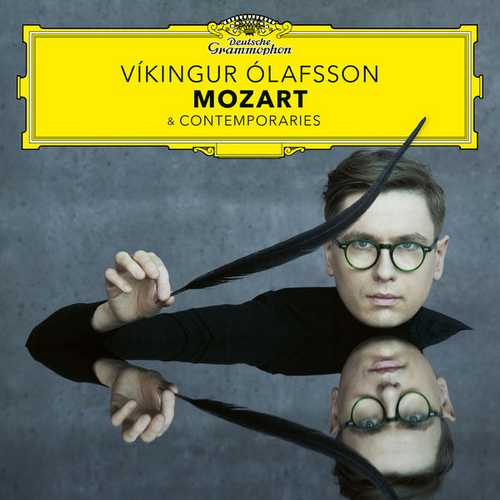 Between tradition and modernity – Víkingur Ólafsson’s repertoire is extremely extensive and spans several centuries. In his previous recordings, contemporary composers such as Philip Glass play just as important a role as the early music by Bach, or the impressionistic sounds of Debussy. He himself describes such a diverse repertoire in a simple way: “I see all music as contemporary music, I don’t make a distinction”. Now, on his new and thus fourth Deutsche Grammophon album, the Icelandic pianist covers another century with Mozart and his contemporaries.

At first glance, the program seems a bit thrown together: In addition to various piano works by Mozart, you’ll find selected works by Carl Philipp Emanuel Bach and Joseph Haydn, as well as their Italian colleagues Baldassare Galuppi and Domenico Cimarosa who pop up in between. However it quickly becomes clear that Ólafsson is once again immersing himself in a new musical era and wants to draw as much as possible from it before presenting it to the listeners. And this is done amazingly well! The pianist manages to reflect the German-Italian influence of the early and high classical period, in the midst of the 18th century, in a uniquely versatile way. In addition to extreme precision, there is also an impressive lightness to his playing at the same time.

Another special feature of this album are Ólafsson’s self-penned arrangements of Mozart’s Adagio in E-flat major, the third movement from the original String Quartet No. 3 in G minor, K. 516, as well as to Cimarosa’s Sonatas No. 42 and No. 55. Here one can discover the performing musician in the role of co-creator at the same time – Ólafsson deals with the music with hair-pin precision and provides it with his personal sensual Icelandic, and, indeed, contemporary touch.

“Far from the glowing image of the angelic prodigy, the music on this album is mostly by the Mozart of the 1780s, a grown man and a mature composer – who in the preceding years had come to know adversity,” explained Víkingur Ólafsson. “This is the period when Mozart was not just perfecting the Classical tradition but subtly subverting it, his graceful touch as featherlight as always but the shadows darker, the nuances and ambiguities more profound.”