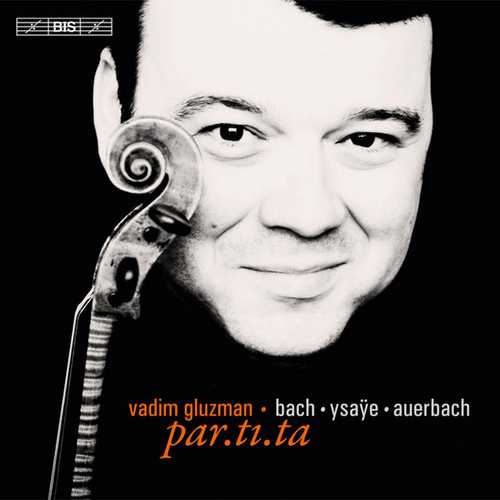 Violinist Vadim Gluzman’s 2012 hybrid SACD on BIS focuses on the Baroque form of the partita or suite, as represented by J.S. Bach’s Partita No. 2 in D minor (famous for its last movement, the Chaconne), and the Partita No. 3 in E major (equally celebrated for the dazzling Prelude and the charming Gavotte en rondeau). But Gluzman also wants to draw connections to two modern works in his repertoire that show Bach’s persistent influence, the Sonata in A minor for solo violin by Eugène Ysaÿe, and par.ti.ta by Lera Auerbach. This seems to be a practical way of introducing listeners to less familiar fare by showing that music doesn’t develop in a vacuum, and that Bach can often be found as an antecedent, as he obviously is in these selections. The Prelude from the Partita No. 3 is plainly audible at the outset of Ysaÿe’s sonata, and connections to the Partita No. 2 gradually emerge from Auerbach’s highly abstract work, where passages are quoted, fragmented, reshaped, and adapted to modern string techniques. Yet there is a change in the listener’s reception when Ysaÿe and Auerbach rip Bach’s music from the familiarity of the dance suite, and reshape it into looser forms that develop and distort it into sardonic commentary. When one hears Bach, one easily recognizes the conventions of 18th century music, but feelings of alienation and disorientation are hinted at in the sonata and made blatant in par.ti.ta. Gluzman is fully communicative, and he demonstrates that he has internalized these works thoroughly. His Bach is impeccable, and listeners will find the partitas enjoyable. However, because of their quirkiness, the other pieces may require several hearings before their enigmatic appropriations and updated contexts make sense.