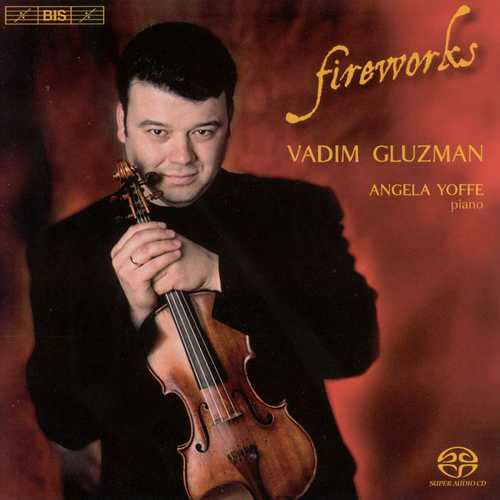 
01. Castelnuovo-Tedesco: Figaro Variations from Rossini’s ‘The Barber of Seville’

Following on from his Tchaikovsky and Glazunov violin concertos disc, Vadim Gluzman now presents a disc of virtuoso violin music by a range of different composers with a sparkling programme fit for any of those virtuosos of days gone by. Indeed, several of them appear in the list of contents in the unaccustomed roles of composer or arranger: Heifetz himself has arranged Fairy Tale, by Medtner, while Szeryng’s version of Halffter’s Habanera receives its world première recording with this release. Other examples of virtuoso-turned-composer are Wieniawski, Francescatti (with a Polka) and Kreisler, whose La Gitana fits into the tradition of virtuoso pieces inspired by gypsy music – a tradition of which Ravel’s Tzigane is of course the jewel.

Here Gluzman performs with Angela Yoffe, his regular duo partner as well as his wife. This well-matched pair has been admired by the reviewers for their intense, passionate and powerful performances as well as for their supreme command of their respective instruments. On their first disc on BIS the reviewer on website Classics Today wrote: ‘Vadim Gluzman and Angela Yoffe push their collective virtuosity sky-high’.