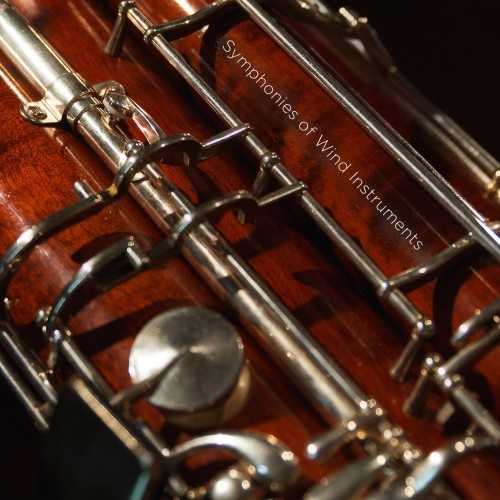 The works featured on this album reflect the universal and timeless balance between tradition and innovation, and the Royal Norwegian Navy Band under Ingar Bergby illuminate this balance in their recordings of these works, and breathe new life into this music. Rolf Wallin (b. 1957), has written music that portrays ‘the dancing dynamics of the universe’, where nothing is stable and everything is volatile.

Symphonies of Wind Instruments by Ingar Bergby and the Royal Norwegian Navy Band on the 2L label is comprised of symphonic wind works by Paul Hindemith, Arnold Schoenberg, Igor Stravinsky and Rolf Wallin. This hybrid Surround Sound SACD was recorded at 24 bit/192 Hz. There is also a Blu Ray disc included.

Hindemith’s Konzertmusik from 1926 begins the program. It is a three-movement work of the neoclassical style. Being neoclassical, it is unlikely to evoke much emotion in the listener, although it is a rather thrilling work at a cerebral level. Schoenberg’s Theme and Variations from 1943 follows Konzertmusik. In America, Schoenberg wrote some music in an intentionally more accessible style in contrast to his atonal music. This was one such example of more accessible. Nonetheless, don’t look for an obvious or memorable Theme here, and you are on your own with the Variations which follow one after another without any noticeable break. Again, this is not particularly moving music, but it is far more interesting than Hindemith’s Konzertmusik. It even ends in an obvious major chord! Glory be.

Next up is Hindemith’s Symphony in B-flat (1951), which is more accessible than his Konzertmusik. The 1st movement is more heavyweight than the Konzertmusik and concludes in an almost-moving coda. The 2nd movement plays between instruments and sounds more delicate than the 1st movement for the most part. But Hindemith returns to a bigger sound with the 3rd movement. I enjoy his tutti sonorities which can explode with sound. The majority of the movement, however, is chamber music-like of various sonorities. You also hear traces of some of his larger orchestral works in this movement. The brief coda is absolutely thrilling.

Igor Stravinsky’s Symphony of Wind Instruments (1947) follows. I found it to be little more interesting than Konzertmusik. Perhaps repeated listening will increase my appreciation for it. As it stands now, I won’t look forward to it.

Finally, we have Norwegian composer Rolf Wallin’s Changes (1984) with its startling opening flourish. This is modern atonal polyphony at its best. Wow. I really enjoyed its dynamic contrasts and various instrumental sonorities. This is an extremely convincing pieces. I would buy the album just for Changes. Unexpectedly, the piece concludes softly with me looking disappointed and wanting more. I think Wallin is an extraordinary talent, and I hope there is more of his band or orchestral music out there on the market. I’m certainly going to keep looking for some.

The Norwegian Navy Band is a superb concert band that plays with heart and precision for director Ingar Bergby. They even have a double bass! The recording is superb but the 2-channel SACD sound gains little over some of my best-sounding Red Book CD’s of wind music. Multi-channel sound was not evaluated. Band balance, soundstage width and depth, and timpani definition are all exemplary. The music is some of the finest written for concert winds, but my favorites are Hindemith’s Symphony in B-flat and Wallin’s Changes. Great music with fantastic sound. VERY HIGHLY RECOMMENDED!!!