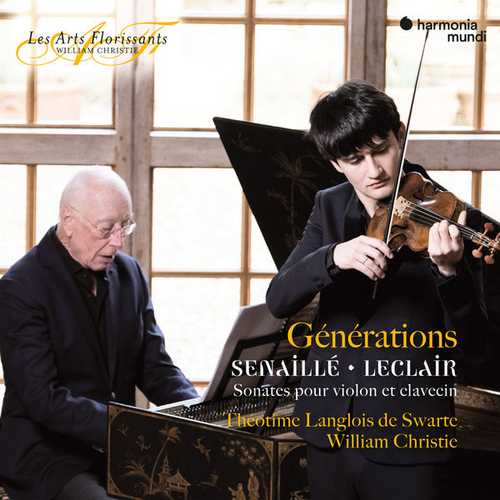 To say that young French baroque violin star Théotime Langlois de Swarte has begun his solo recording career with a bang of prolificity and brilliance is something of an understatement. First, in 2020, we had “The Mad Lover”, a beautifully conceived and executed concept album exploring the 17th century English notion of melancholy via composers such as Henry Purcell and John Eccles. Then at the start of 2021 came Proust, “Le Concert retrouvé”, recreating a 1907 concert at the Paris Ritz programmed and hosted by Marcel Proust. Now here’s “Générations”, an album every bit as fine as its predecessors, with also a couple of key differences.

Topmost of these is that, while Langlois de Swarte’s chamber partners for those first two albums were rising stars of his own generation, in the form of lutenist Thomas Dunford for “The Mad Lover” and pianist Tanguy de Williencourt for Proust, his “Générations” partner is fifty years his senior – early music luminary, William Christie, with whose Les Arts Florissants Langlois de Swarte plays in addition to his own period ensemble Le Consort. Then also because this isn’t so much a concept album as one aiming to ignite modern interest in a forgotten star of early eighteenth century French instrumental music, Jean-Baptiste Senaillé (1697-1764), by placing his sonatas alongside those of a famous violinist figure of the generation just above him, Jean-Marie Leclair (1697-1730). What both composers have in common is their melding of Italian virtuosity with French music’s characteristic elegance, melodicism and dance allusions.

It almost goes without saying that Christie and Langlois de Swarte make for a delectable musical match, but the closeness of the partnership really does shine out. The recording sessions took place in the living room of Christie’s home in the Vendée, giving them both an intimate environment with no time constraints, and the album opens with one of the fruits of that privileged set-up: a lyrically melancholic Gavotte in E minor by Leclair, originally for two violins, which the pair transcribed for harpsichord and violin, Christie adding a second melody line for himself.

As for Senaillé, “a minor figure but a great master”, is how Christie himself describes him, and that analysis feels spot on. Take the Sonata in G minor, Op. 1 No. 6 from his Premier Livre de Sonates à violon seul avec la basse continue, published in Paris in 1710, whose opening Largo prelude strikes instantly for its emotional intensity, and for the satiny smoothness with which Langlois de Swarte delivers his violin line’s wide intervallic leaps; and the pair produce something very special as they dig deep into its dark mournfulness. Pleasures of a different shape then come with the concluding Gavotte’s virtuosic violin writing, including ear-grabbing double-stopped passages. Or for a particularly colourful instance of Senaillé taking the Italian style and making it his own, jump to the final Allegro assai of his third book’s Sonata in D major, Op. 3 No. 10 (this one published 1716): a syncopated, stabbing bass drone from the harpsichord to start, onto which the violin dances a rustic folky melody which later incorporates cuckoo call bariolage – a Vivaldian motif in itself, but one that’s here thoroughly reimagined into a French musical style. Essentially, you can hear exactly why all five of Senaillé books of sonatas were reprinted numerous times in his lifetime. Also why, for Langlois de Swarte, the only way is up.