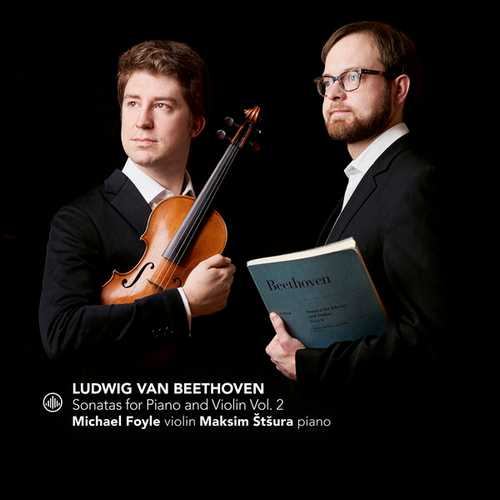 The second volume of the ongoing series dedicated to Beethoven’s Sonatas for Piano and Violin. With this recording, we move from youth to maturity with the entire opus 30, composed in 1801.

The year 1802 proved to be a year of true challenge for Beethoven, as he finally realised that his decline into deafness was irreversible. However, in this year Beethoven composed some of his most radiant and life-affirming works in that period. Possibly as part of the determination to push the boundaries of his art in pursuit of solace and fulfilment, Beethoven demonstrates a remarkable stylistic shift between the Op. 12 and the Op. 30 Sonatas (written in 18012, published in 1803). While the former set was dedicated to Salieri in a nod of appreciation towards his education, the latter was dedicated to Tsar Aleksandr I of Russia, celebrated upon his visits to Vienna in the first part of the 19th Century for his wide-reaching reformist attitude.

Praised for ‘playing of compelling conviction’ (The Daily Telegraph) and ‘astonishing mutual feeling, understanding and responsiveness’ (Seen and Heard International), Foyle-Stsura Duo was formed in 2012 and won the Beethoven Piano Society of Europe Duo Competition and the Salieri-Zinetti International Chamber Music Competition in 2015.

Since then, the Duo has performed over 200 recitals in venues such as Wigmore Hall, Purcell Room, Buckingham Palace, St. Martin-in-the-Fields, Bridgewater Hall in Manchester, Usher Hall in Edinburgh, The Concertgebouw in Amsterdam, as well as for the St. Magnus International Festival, Grachtenfestival Amsterdam, New York Chamber Music Festival, Cervantino Festival in Mexico and Evgeny Mravinsky Festival in Tallinn and St. Petersburg. Their performances have been broadcast live on BBC Radio 3, NPO Radio 4 and Estonian Klassikaraadio.