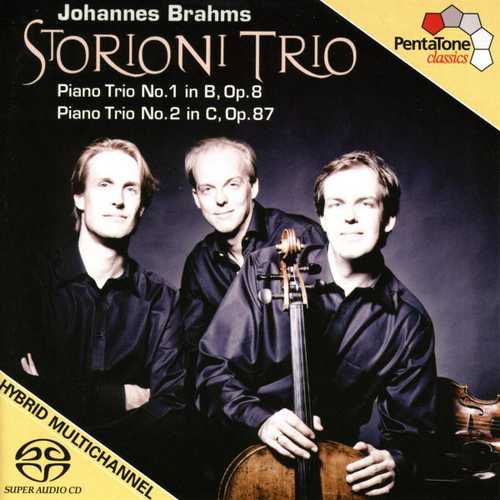 It has taken less than five years for the Storioni Trio to become regarded as one of the major Trios performing on the concert platform today. Engagements have included performances at the Carnegie Hall, New York and the Wigmore Hall, London. Future engagements include performances in the USA and China. Their previous recordings of Beethoven and Schubert both received excellent reviews.

The Storioni Trio seems to be on a roll. In 2005 it recorded a fine pairing of Beethoven piano trios, in 2007 it brought a singing passion to both of Schubert’s trios, and with this 2008 release it demonstrates once and for all it is a master of the genre. Pianist Bart van de Roer, violinist Wouter Vossen, and cellist Marc Vossen are technical masters, and together they create an easy, soulful ensemble, producing performances that are both in touch with tradition and unmistakably original. Brahms’ early B major Trio and his much later C major Trio sound like the German Romantic’s music should: ardently lyrical yet cogent, rhythmically vital, and sonorous. But they also sound like they are being interpreted by musicians who’ve grown up in the later years of the twentieth century: warm but not sentimental, driven but not inflexible, and more concerned with expressing the composer’s intentions than in showcasing themselves. The combination is appealing, especially in PentaTone’s super audio sound, which is ideally balanced between crystalline clarity and vivid immediacy.