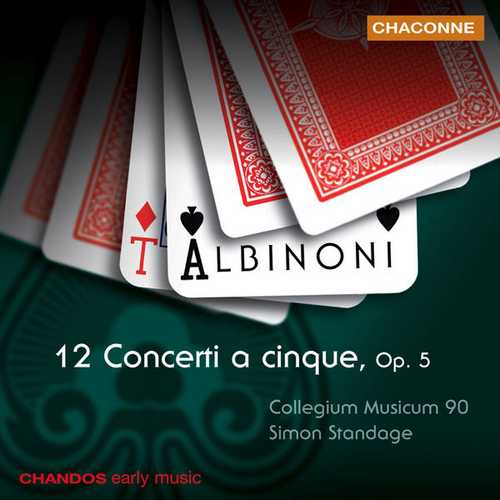 Albinoni might be described as a specialist in the medium of the Concerto a cinque, of which he composed 54, published at intervals during almost half his productive life. The first six appeared in his Op 2 (1700), together with six sonatas from which they inherited some structural features, and were followed in 1707 by the 12 of Op 5. They were ‘halfway houses’ on the road to the violin concerto per se as we know it – and as Vivaldi established it four years later.

Virtuoso passages for a solo violin appear only en passant in flanking movements and ‘symmetrically’ in the Adagios of Nos 3, 6, 9 and 12. Each Concerto is in three-movement form and all the finales are fugal, as they are in the Op 2, though in their simplicity they sound rather like rondos.

There was little by way of innovation in Albinoni’s concertos, which leant on past examples and stressed some of their most durable features, but the lyricism of the Adagios of Nos 2, 5, 8 and 11 (again symmetrically placed) was indeed new. Their strength is in his gift of melodic invention, their clearly defined form and thematic material, their conciseness – a virtue that didn’t survive in some of his later concertos – and their vitality and freshness.

The recording and annotation are of the highest standard, and of the performances it might be said that if they’re ever bettered in any respect, we and Albinoni will indeed be fortunate.