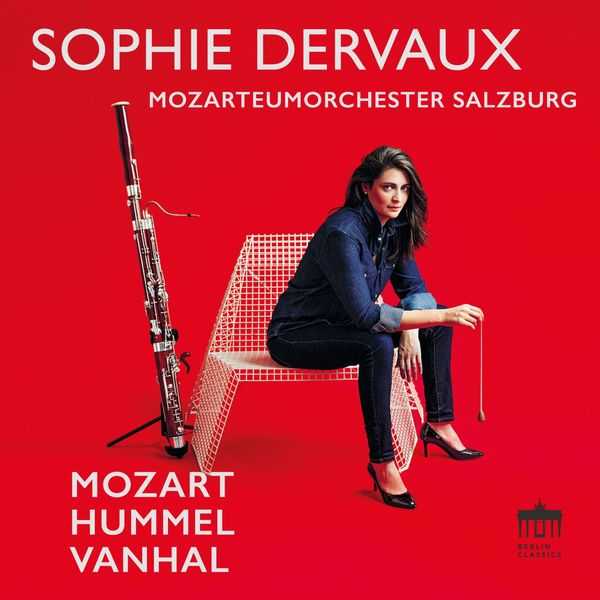 Following on from her debut album impressions, featuring chamber music for bassoon and piano, bassoon player Sophie Dervaux is poised to release her second album on the Berlin Classics label. This album marks two premieres: in addition to this being the very first recording of the Concerto No. 2 in C major for bassoon and orchestra by Johann Baptist Vanhal, Dervaux performs as both soloist and conductor of the Mozarteum Orchestra of Salzburg.

The recording of Mozart’s Concerto in B-flat major for bassoon and orchestra was the starting point for this present recording. It is acknowledged to be one of the most important works ever written for the wind instrument: composed in the Viennese Classical style, sophisticated and nuanced – and the only bassoon concerto by Mozart to have survived. “The Concerto in B-flat major forms the basis for many bassoonists’ repertoire”, Sophie Dervaux explains, “and for that reason I have long waited to record the work – it is an important step along my career path and I faced up to it with respect”.

What can be paired on an album alongside a work that enjoys the huge significance of Mozart’s Bassoon Concerto? Sophie Dervaux has chosen two composers who were close to Mozart, and who share a common history with him. Vanhal and Hummel, like Mozart, all left their mark on the musical history of Vienna – the city in which Sophie Dervaux, as solo bassoonist with the Vienna Philharmonic, has chosen to make her home.

Johann Nepomuk Hummel was a pupil of Mozart; for a while, he lived under the same roof as his teacher. Hummel’s compositions are stylistically located on the cusp between Viennese Classical and the Romantic era: the the finale of his Grand Concerto shows evidence of folk-music influences. Like Mozart’s Concerto in B-flat major, Hummel’s Grand Concerto in F is also a standard work in today’s bassoon repertoire.

Johann Baptist Vanhal’s Concerto for Bassoon and Orchestra on the other hand, “was like a blank sheet of paper”, says Sophie Dervaux. “I had no end of opportunities in the interpretation; indeed, I did not even know quite how it would sound when I began. The first few notes were a really wonderful surprise!” Although Vanhal, who was born in Bohemia, was counted among the foremost composers of the day in his lifetime, very few of his works have been published or performed in recent times. As an “ambassador” for her instrument, Sophie Dervaux has for many years been championing the expansion of the repertoire for bassoon and for introducing unknown works to a wider audience.

When recording this album, featuring Mozart’s Bassoon Concerto as the starting point, she consciously chose the Mozarteum Orchestra Salzburg; after all, who could be better suited than an orchestra from Mozart’s home city, an ensemble that can look back on such a great tradition? “It was a highly rewarding collaboration with the Mozarteum Orchestra, a musical interaction that I will long cherish”, recalls Sophie Dervaux. Conducting was again a new and intensive experience. “I am very grateful to all the musicians for their unparalleled support. A great sense of energy built up between us. Playing with and above all conducting this orchestra has awakened my curiosity more than ever. I intend to continue along this path”. Both of those paths in Sophie Dervaux’s career – as bassoonist and conductor – come together convincingly on her new album Mozart, Hummel, Vanhal.