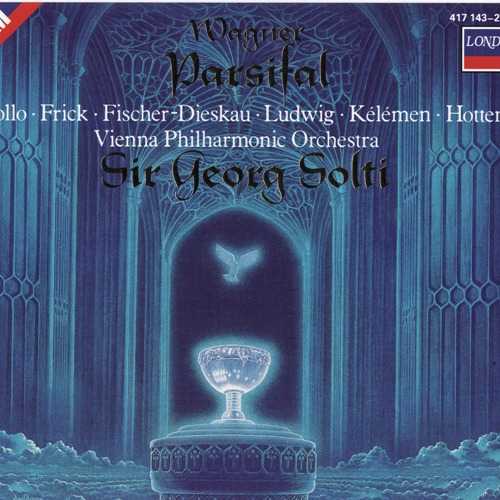 This is the recording that the hero of Simon Gray’s play ‘Otherwise Engaged’ keeps trying to listen to, but keeps getting interrupted before he can get beyond a few bars.

What he would have heard if he’d got to the end would have been perhaps the best sung of all Parsifals. The cast is a starry one (certainly for its time) and they all acquit themselves with more than usual credit.

Top of the list belongs to Gottlob Frick singing this Gurnemanz as his swansong to the recording studio. If you think of him only as the pitch black villains of Walkure and Gotterdammerung or the authoritarian rulers of Lohengrin and Tannhauser, think again. This is a warmly wise mature Knight of the Grail whose every word and musical phrase is deeply considered and sung with meaning and understanding. No garrulous old bore, this. Fischer-Dieskau, too, brings all his experience of lieder singing to bear on the text and the music. This Amfortas is no mere cypher, but an honourable, flawed and deeply anguished man. Christa Ludwig presents all the sharply contrasted facets of this profoundly complex character to her portrayal of Kundry. Maybe she lacks just the last volt of electricity generated by Martha Modl in Act 2. The one slightly weak link in this estimable array is Rene Kollo, a rather bland Parsifal with insufficient distinction between the ‘reine Tor’ who erupts on the scene in Act 1 and the wiser, older, world-weary black knight who trudges into the final Act. A glance down the cast list reveals strength in depth right down to a list of Flowermaidens that includes Kiri te Kanawa and Lucia Popp.

As for the conducting, Solti is Solti – exciting, precise, a little hard-driven at times and inclined to be episodic. As always, he draws ravishing sounds from the Vienna Philharmonic and his familiar Decca engineers do him proud by the standards of the day.

This is certainly a candidate for a top recommendation Parsifal with its great singing cast and its (relatively) modern sound. Personally, though, I’d go back to the 1951 Knappertsbusch and settle for the more dated sound.