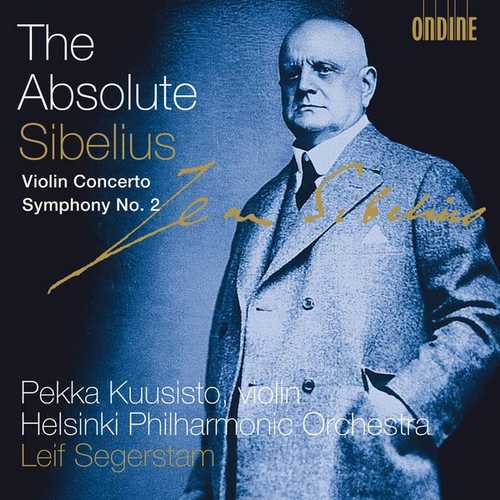 Is this coupling of Sibelius’ Violin Concerto and Second Symphony really “The Absolute Sibelius?”

The Violin Concerto is absolutely the Finnish composer’s most popular work after Finlandia and the Second Symphony his most popular work after the Violin Concerto. Whether or not they are his best composed works — the later symphonies and tone poems may take that honor — the concerto is wildly passionate and extravagantly virtuosic and the symphony unrelentingly resolute and unendingly heroic. If these were the only works of the composer’s in existence, Sibelius would absolutely have to be counted among the best fin de siècle composers.

There have been many great recorded performances of both works, but this 1996 recording of the concerto and 2002 recording of the symphony are among the very best at the turn of the millennium. Pekka Kuusisto’s concerto is almost unbearably ardent and Leif Segerstam and the Helsinki Philharmonic’s symphony nearly overwhelmingly valiant. At least while they are playing, it absolutely ranks among the greatest performances of all time. There have likewise been many superb recordings of both works, but with their combination of vivid clarity and palpable immediacy, these Ondine digital recordings are among the best ever made.