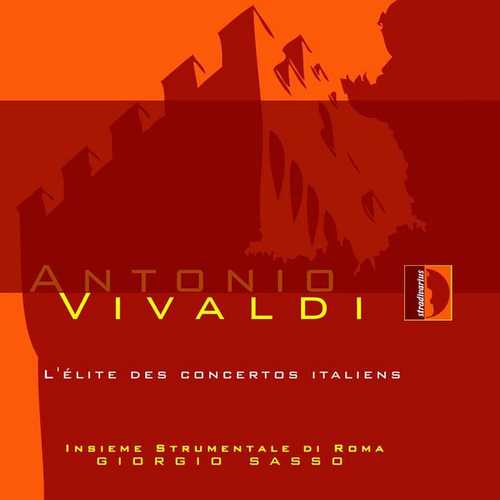 “The works for violin, strings and continuo recorded on this disc, for the first time ever, constitute a representative example, even if obviously not an exhaustive one, of the complex world of experimentation that Antonio Vivaldi attempted in this, the most frequent form of all his production.As we are aware that our choices are in no way objective, we have tried to vary the instrumentation of the continuo, and also the number of ripieno violins used as we proceeded, to seek to give the most suitable colour to the expressive humus of each moment.” Giorgio Sasso

The subtitle of this album by Italian violinist and conductor Giorgio Sasso describes the contents as L’élite des concertos italiens. A note by Sasso in the booklet describes the concertos as “a representative example, even if obviously not an exhaustive one, of the complex world of experimentation” in Vivaldi’s violin concertos. And the main booklet notes (in Italian, French, and English) mostly discuss the multiple versions Vivaldi issued for some of these concertos. It’s thus a bit hard to discern the overall aim, but this remains an enjoyable group of eight concertos that show how many riches remain buried under the top crust of frequently performed Vivaldi violin concertos. Several of the variants performed here are world premieres.

The “experimentation” aspect is exemplified by the marvelous pizzicato slow movement of the Violin Concerto in C minor, RV 197 (track 5), and nearly every other work on the album contains a surprise of one kind or another. (Sample the almost minimalist middle movement of the Violin Concerto in E minor, RV 276, where the violinist almost has to struggle to get its emotional outpourings heard.) Sasso, although a contemporary of Rinaldo Alessandrini, Ottavio Dantone, and the other young Italians who have been revolutionizing the performance of music of the Italian High Baroque, differs markedly from them in style; in place of operatic gestures and high emotional levels are sweet string sounds from a small ensemble and a balanced approach that puts the emphasis on Sasso’s perfectly controlled but not unlively solo playing. The performances tend to grow on you rather than knocking you out at first encounter. The church sound environment is a bit chilly, but this will be a welcome addition to the Vivaldi shelf (or folder) for anyone who has caught the Vivaldi concerto bug.