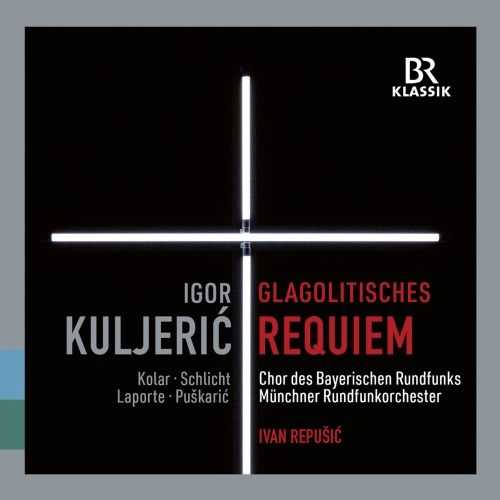 During the composition of his Croatian Glagolitic Requiem for soloists, chorus and large orchestra, Kuljeric´’s credo was “to dispense with any ‘quoting’ or ‘copying’ of musical material”. He was far more intent on translating into music that “miraculous echo” of the Glagolitic chants, which had accompanied him ever since his youth. In the Introitus, ringing bells and chanted choruses set the basic religious mood straight away for a deeply heartfelt musical prayer for the dead. Additional timbres in the orchestra are created by the organ, the harp and, in the percussion section, by the bells and the vibraphone. Kuljeric´ sets the other parts of the requiem to music in six sections, in the manner familiar to us from Mozart and Verdi. As a second section, however, he inserts the Tractus (“Otriši, Gospodi”/”Liberate the souls, O Lord”) from the Proprium of the Requiem – a prayer of repentance and sadness that is sung in place of the ceremonial Alleluia in the mass for the dead and at Lent.
The sequence, with its vivid and dramatic visions of the Last Judgement, clearly conveys what has already been indicated by the Introitus, Kyrie and Tractus. Unlike Mozart or Verdi, Kuljeric´ not only translates individual images into music but also creates a second, almost scenic level: the Croatian Glagolitic Requiem imagines the mourners themselves as they chant the prayers together and try to understand their significance. A mournful congregation taking its leave of a beloved person, pleading for mercy, and confused by conflicting feelings between death and salvation. The melodic lines of the soloists and chorus are often closely intertwined, like a reminder of the alternation between priests and congregations in lamentations that are sometimes reminiscent of orthodox hymns, with expressive cantilenas, whispers and monotonous chanting in an attempt to cope with grief. Again and again, Kuljeric´ provides passages in which the musical statement becomes increasingly intense and dense: recitations alternate with brief orchestral interjections, and highly tense, syncopated text rhythms open out into urgent unison passages in which the mourners seem to speak with one voice. Towards the end of the Offertorium, Kuljeric´ inserts a deeply moving passage into the music when the rhythm, recurring patterns and the beat all dissolve into nothingness, and solo voices unfold above floating sounds. It is here that the listener receives the essential message of the Requiem: “Lord, in praise we offer you sacrifices and prayers, accept them on behalf of those whom we remember this day. Lord, make them pass from death to life.”
The powerfully suggestive imagery of the one-hour-long Croatian Glagolitic Requiem made the work very popular, and following its premiere on July 27, 1996 in Zadar, it was soon performed again at the Zagreb Summer Festival and the Music Autumn of Samobor. The jury of the Croatian daily newspaper Vjesnik awarded the Josip Slavenski Prize to Kuljeric´ and his work, calling it “an outstanding achievement in contemporary music of the year 1996.”