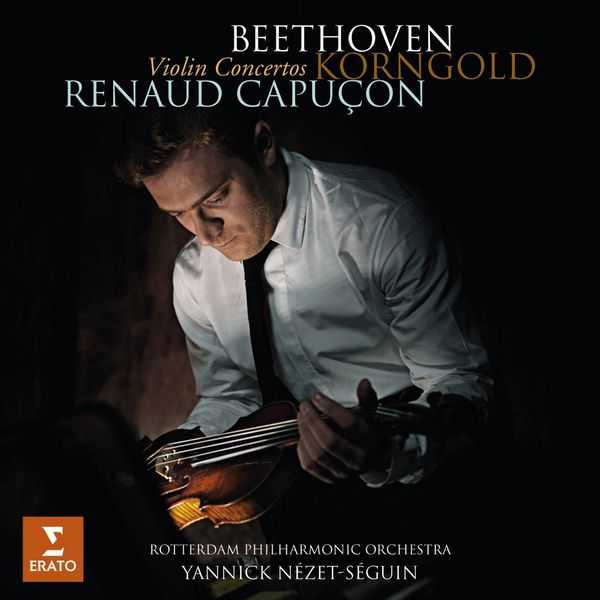 “Renaud Capuçon is one of today’s outstanding violinists – less flashy than some, but a fabulously musical player who is as remarkable a chamber player as he is a concerto soloist,” wrote The Guardian in its review of the French violinist’s recent Virgin Classics CD of Mozart concertos, describing the disc as “a fine achievement”, while the Scottish newspaper The Sunday Herald felt that: “Capuçon’s silvery tone and expressive phrasing of the slow movements … beautifully balance his brisk and exhilarating takes on the allegros and prestos….Don’t miss this one.” The BBC Music website pointed out that “Capuçon’s style, perhaps because of his regular chamber work, is natural, understated and perceptive; the sound of a musician happily relaxed in his skin and not feeling the need to prove any virtuosic credentials. His performance here is lithe, graceful and refined, capturing vivacious humour with luminous upper-stringed sparkle, and colouring the slower movements with warm, musical poetry.”

Capuçon’s Virgin Classics discography is substantial, but much of the focus has been on chamber music – only two previous discs have featured him in solo concertos. Now he takes on two highly constrasting works: Beethoven’s sublime concerto, a touchstone of any major violinist’s repertoire, and Korngold’s gorgeous work, written in 1945 for one legendary violinist, Bronislaw Huberman, but premiered in 1947 by another, Jascha Heifetz. Korngold, once known primarily for his spectacular film scores, has in recent years achieved a significant presence in opera houses and concert halls – notably with his early opera Die tote Stadt and with this concerto, which in fact draws on material that the composer originally produced for Hollywood movies, Another Dawn (1937), Juárez (1939), Anthony Adverse (1939) and The Prince and the Pauper (1937).

If one did not know that French violinist Renaud Capuçon had gotten married just two days earlier, one might almost have guessed it from these extraordinarily joyful recordings he made of Beethoven’s and Korngold’s violin concertos. Capuçon was already well known among classical music cognoscenti from his many chamber music recordings for his supple phrasing, effortless lyricism, sweet tone, and big sound. But his previous concerto recordings of Mozart, Mendelssohn, and Schumann, while exemplary, have not revealed his stature as a soloist as well as these performances. Here, Capuçon sounds every inch the major international violinist. His playing, as always, is brilliant and beguiling, and his interpretations are filled with strength, energy, and, above all, an indescribable but palpable love. There’s a tenderness and affection in his Beethoven concerto, and an excitement and enjoyment in his Korngold that few other violinists have matched and none have exceeded. Conductor Yannick Nézet-Séguin elicits warm-hearted accompaniments from the Rotterdam Philharmonic, and Virgin provides the musicians with lushly colored and richly detailed digital sound.