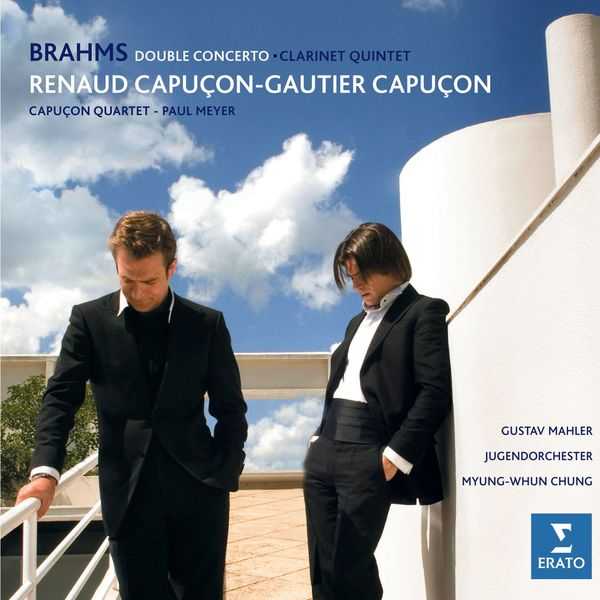 The stellar young Capuçon brothers seem incapable of setting a foot wrong on disc and they put their considerable chamber-music experience to great use in Brahms’s final orchestral work, with cellist Gautier Capuçon proving an eloquent lead in the vehement first movement.

The other striking aspect about this performance is the sheer range of colour, not only from the soloists but also from the Gustav Mahler Youth Orchestra, who play their hearts out for Myung-Whun Chung in this most symphonic of concertos. If Oistrakh and Fournier are still irresistible in the slow movement, offering a perfect balance of melodic lines that are lovingly cherished but never saccharine, the Capuçons are still very impressive, and their finale is full of vitality, making much of the folk-tinged inflections and achieving a seemingly telepathic unanimity in their shared passages.

For a change from the usual concerto companion we get Brahms’s Clarinet Quintet, written in 1891, four years after the Double Concerto. In this coupling it’s easy to hear the Quintet’s famous autumnal quality prefigured in the outer sections of the concerto’s Andante.

Paul Meyer is an ideal protagonist, producing a wide array of mellow shadings in the opening movement, yet never underplaying the more agitated passages within the piece, notably the Presto of the third movement. The quartet are minutely responsive to Meyer’s every move and even seasoned Brahms aficionados will find new detail to relish in both the performances here.

Here is a Double Concerto to listen to again and again. Not least because it is rather unusual. The Capuçon brothers are accomplished chamber musicians and they often dig into this music as though in a chamber concert, taking time to explore, passing ideas between themselves. It doesn’t displace the recent Fischer/Müller-Schott, but sits alongside

…here’s a very fine reading of Brahm’s Double Concerto from the stellar young Capuçon brothers. The other striking aspect about this performance is the sheer range of colour, not only from the soloists but also from the Mahler Youth Orchestra, who play their hearts out for Myung-Whun Chung in this most symphonic of concertos.

Gautier Capuçon launches into the opening cello solo with a rhapsodic freedom and expressive abandon that seems to sweep all before it. The performance is outstanding

Existing fans of brothers Renaud and Gautier Capuçon have likely been waiting with baited breath for their eventual and inevitable release of the Brahms Double Concerto, a work that would seem to have their names written all over it. Their premiere duo album, Face a Face, demonstrated their incredible technique, precision intonation, and inborn knack for playing together. Each brother’s solo ventures, from Gautier’s vivacious interpretation of the Haydn cello concertos and Renaud’s insightful performance of Mendelssohn and Schumann, have been similarly highly regarded. All of these positive attributes makes this much-anticipated recording all the more disappointing because many of these traits are mysteriously absent. From the very beginning, listeners will notice a distinct lack of energy coupled with an abundance of overindulgence as Gautier’s opening cadenza becomes so ponderous that it almost comes to a halt. Similar pacing problems occur any time either of the brothers is given a moment without the orchestra to push them along. The unwavering unification of the brothers’ playing heard in Face a Face is also sadly absent; neither their sound quality nor intonation nor articulation matche as it once did. Kudos should be given, however, to the Gustav Mahler Jugendorchester — composed of European youth — who offer a surprisingly mature, rich symphonic sound.

Also on the album is Brahms’ ethereal Op. 115 Clarinet Quintet. Clarinetist Paul Meyer joins the Capuçon Quartet; his glass-like, plaintive sound quality really carries the entire ensemble. The Capuçon brothers try to make the performance too much about themselves, however, which results in frequent balance problems.