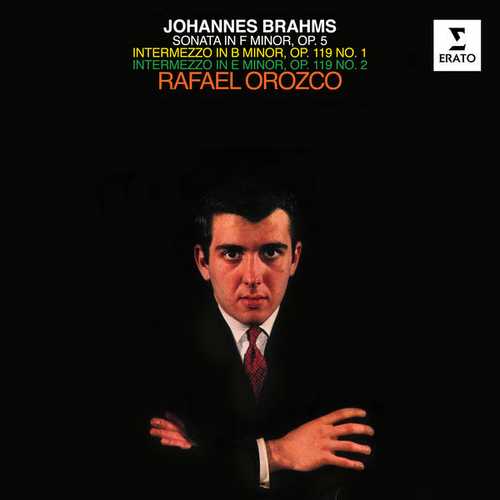 This long-awaited return of the recordings made for His Master’s Voice by Rafael Orozco between the late 1960s and early 1970s, a few years before the Spanish pianist signed a contract with Philips, is quite an event. These early Orozco records – never reissued since the release of the LP – show an unprecedented musicality, a magnificent, full-bodied sound, combined with great precision in the attacks. This is the Brahms LP, recorded in Paris at the Salle Wagram on 13 May 1970.

Brahms’ Third Sonata remains phenomenal in its structural clarity. The Allegro maestoso is striking in the breadth of its gesture, implacable and ‘anti-hieratic’. The Andante espressivo, whose opening surprises with its fast tempo, is touching because of its infinite tenderness, free of the slightest sentimentality, especially as Rafael Orozco lends a sensual and very intimate atmosphere to the most contemplative moments of the movement. He masterfully differentiates between moments of naturalistic tonality and others that are more animated by feelings of love, as Claudio Arrau has already pointed out in connection with this Andante. The next two movements are what they are, scenes of life. In the Intermezzo, Rafael Orozco is particularly sensitive to the tolling of the knell in the final pages, which are quite astonishing and almost anticipate certain Mahlerian passages. The Finale forms a perfect counterpart to the first movement: Orozco’s alert and radiant playing, so supple, never monolithic and yet with an astonishing feeling of fullness, is here nothing but smiles and evasion. What a pianist!

The two Intermezzi of Opus 119 will only confirm the poetic uniqueness of a pianist who is now scandalously forgotten by all his publishers. We can’t wait for more!