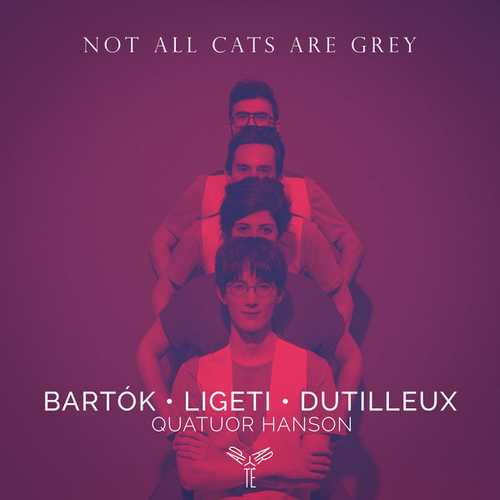 Not all cats are grey at night, as the Hanson Quartet prove in this unexpected nocturnal odyssey.  From Bartók’s folk influences, including Central Europe and Maghreb, to Dutilleux’s impressionist prints in Ainsi la nuit, and of course Ligeti’s masterful Métamorphoses nocturnes, this recording gives us the opportunity to discover a moving, tireless and very lively night.

It thus reveals a mysterious landscape, shifting constantly between consciousness and sleep, between dream and hallucination, and in constant mutation.

After a Haydn album that was acclaimed by critics and awarded Diapason d’Or de l’année 2020, the Hanson Quartet get back in the studios with an initiatory journey among the most beautiful chamber music works.

When it comes to French string quartets, Autumn 2021 has been notably nocturnal-flavoured. First there was the superb “round midnight” from the genre’s rockstars, Quatuor Ébène – a programme of music for after dark that paired Dutilleux’s Ainsi la nuit of 1976 with a quartet arrangement of Schoenberg’s Verklärte Nacht (1899), bridged by a new jazz-infused work by the quartet’s cellist-composer Raphaël Merlin. Now here’s “Not all cats are grey” from one of France’s most exciting new generation quartets, Quatuor Hanson, whose own night-themed trio of works has the Dutilleux sitting at its climax, preceded by Bartók’s String Quartet in A minor of 1917 – metaphorically representing a dark time for Europe, and studied by Dutilleux before he wrote his own quartet – and Ligeti’s String Quartet No 1 “Métamorphoses nocturnes” of 1954.

Beyond having one of the smile-eliciting album titles of the year, “Not all cats are grey” also thoroughly delivers on its actual contents. If you’re wondering what the title actually refers to, it’s the fact that at night time all cats suddenly look grey on account on it being more difficult to distinguish separate colours, and that in the same way it can be all too easy to hear so-called contemporary music as all sounding the same. The Hanson’s mission is therefore to bring out the myriad of contrasts between these three major works via a multi-hued night time musical landscape representing everything from sleep, dreams and hallucination, to liveliness and intense movement; and they’ve very much achieved that aim.

First thing to say is that there’s a very satisfying balance to the programme’s overall architecture, thanks to their having placed the Dutilleux and Ligeti – each a series of micro-movements heard as a single movement which organically develops an initial motivic idea – as their two-book-ends; and you’re hearing an equal degree of architecture across the interpretations themselves, on both the macro and micro level. Tone and articulation-wise, there’s just the right, brightly crystal-edged, lucid-textured sound that served them so well in their Diapason Award-winning Haydn recording of 2019.

Favourite snapshots? How about the exhilarating bite, folky kick, momentum and technical precision of the Ligeti’s Vivace, capriccio; then the similar qualities they bring to the even more obviously folky strains of the following Bartók’s central Allegro molto capriccioso; the slender-toned delicacy with which they open the Bartók’s Lento, and the dramatic tautness with which its long lines then proceed; the gorgeous gossamer wisps heard in the Dutilleux’s Nocturne 2, and the nimbleness, colouristic range and sense of organic progression they bring to that entire work’s exploration of different sound effects. Essentially, I won’t be surprised if this album ends up picking up an award or two, too.