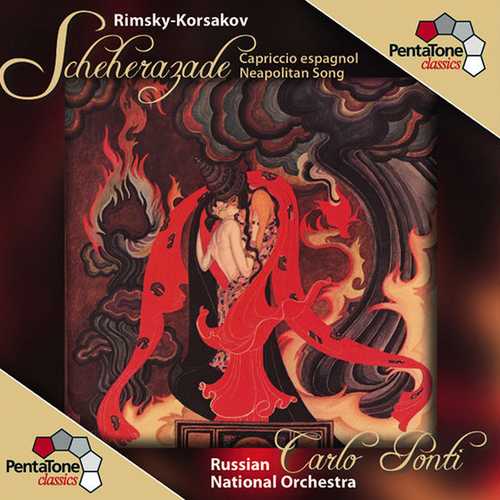 These popular Russian works by Rimsky Korsakov are performed by the best Russian orchestra, conducted by Carlo Ponti Jr. (son of Carlo Ponti and Sophia Loren). Their previous collaboration on PentaTone (PTC5186332) of popular works by Mussorgsky was well received “… his thoughtful musicianship secures a classy orchestral response.” Gramophone

It’s hard to imagine more delightful showpieces for a super audio CD than Scheherazade and Capriccio espagñol, two dazzling masterworks by Nikolai Rimsky-Korsakov that are among his most popular creations. Carlo Ponti’s exceptional conducting, the Russian National Orchestra’s sumptuous playing, and PentaTone Classic’s fantastic multichannel sound combine to make this a dream SACD for any audiophile and a great demo for anyone who wants to show off high-end stereo equipment. But beyond the obvious advantages of this package in terms of performance and recording excellence, the music itself is the biggest draw. Scheherazade is a symphonic suite based upon the “1,001 Arabian Nights,” and Rimsky-Korsakov employed all of his orchestral ingenuity to create this richly imaginative score, regarded by some as the composer’s best purely instrumental work. Capriccio espagñol is a tour de force of sparkling colors and melodies redolent of Spain, and it has been a hit with audiences ever since its premiere in 1887. To fill out the rest of the program, Ponti has included the jaunty Neapolitan Song, which Rimsky-Korsakov arranged on “Funniculì, Funniculà.” This superb album is highly recommended.