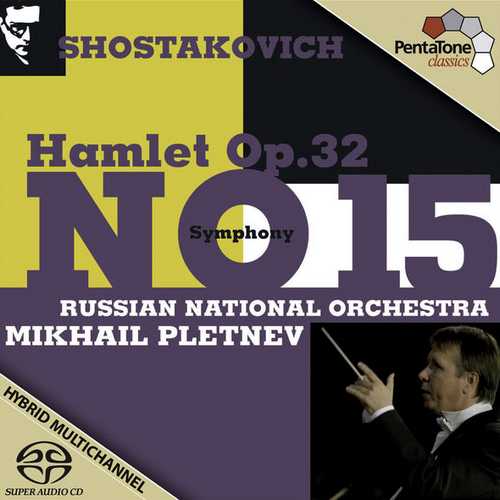 This is the fifth disc in the PentaTone Shostakovich Symphonies cycle. To quote the Gramophone: “the Russian National Orchestra’s refinement has opened a new chapter in Russian orchestral playing.”

While Dmitry Shostakovich’s quirky incidental music for Hamlet is a decent filler piece on this 2009 SACD from PentaTone, the real point of interest is the Symphony No. 15, which must be placed among the master’s most inscrutable yet compelling works. Mikhail Pletnev and the Russian National Orchestra deliver one of their finest performances here, possibly because the prospect of revealing everything to the mutichannel DSD recording process keeps them on their best behavior, but also because the symphony demands a wholly serious approach and pushes the musicians to give their all. Pletnev is best known as a brilliant and exciting pianist, but his conducting is often regarded as less accomplished and at times even mediocre, so hearing this recording may restore some listeners’ faith in this artist. His interpretation of the Symphony No. 15 is straightforward and conservative, and he stays fairly close to the score, a judicious choice considering the pitfalls of straying into comedy on the one hand, or bathos on the other. Shostakovich’s sardonic use of Rossini’s William Tell Overture in the first movement should inspire no more silliness than the quotation of Wagner’s fate motive from Der Ring des Nibelungen in the Finale should instill dread. No one is quite sure what these pieces of musical bric-a-brac signify, beyond possible autobiographical associations that Shostakovich never fully explained, but they give this work a mysterious quality that is best left suggested rather than overstated. Even the opportunities for hysteria in the Adagio or slapstick in the third movement are handled quite carefully, and Pletnev’s restraint enhances the symphony’s ambivalent character. In the end, after the haunting closing measures have faded to silence, it seems the symphony remains as enigmatic as ever, and Pletnev has admirably preserved that essential quality. PentaTone’s audio is spacious and deep, and everything that can be heard vividly comes through.