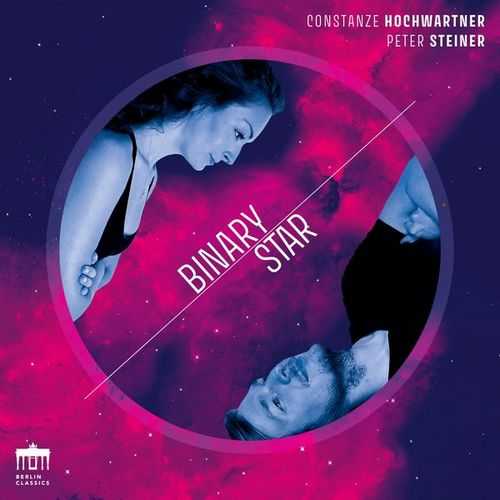 With “Binary Star”, trombonist Peter Steiner and organist Constanze Hochwartner take you on a journey through the infinite expanses of the cosmos. The program of the album unites different composers and spans the musical arc from the late romantic Gustav Mahler to the film music composer John Williams.
After the Austrian trombonist presented his album “Sapphire” with Constanze Hochwartner on piano in 2018, the two pull out bigger guns on “Binary Star”. These allow them to simultaneously present a range of sounds appropriate to the album’s theme and dust off the time-honored combination of wind instrument and organ. “This brilliant combination allows us to create a wide variety of timbres and to realize all the musical ideas we have in the best possible way”, say Peter Steiner and Constanze Hochwartner. Their program leads once across the galaxy and consists of orchestral literature, which the two arranged and had arranged for their instruments themselves.

Like the launch of a rocket, the musical prelude is Strauss’ Also sprach Zarathustra, probably the most famous and impressive introductory piece in music history. Gustav Holst’s Planets is given its own unique character and sound by the new arrangement and instrumentation. This is followed by excerpts of “From the New World”, Dvorak’s 9th Symphony, the energetic Summon the Heroes by John Williams, Gustav Mahler’s Urlicht and Andrew Lloyd Webber’s The Phantom of the Opera. The finale – almost as if disappearing into the infinity of space – is an arrangement of Samuel Barber’s famous Adagio, originally for string orchestra, here for solo organ.
The realization of this album is associated with great enthusiasm for the duo. Steiner and Hochwartner are a well-rehearsed team, which is reflected in their musical interplay. “For three and a half years”, says Peter Steiner, “Constanze and I have been looking forward to this project. And I’m thrilled with the outstanding skills of Emily Horton, who wrote the arrangements”.