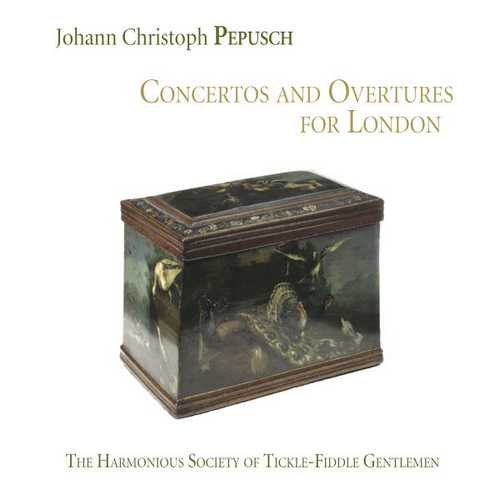 
01. Overture to The Beggar’s Opera in B-Flat Major: Adagio – Allegro

Johann Christoph Pepusch (1667-1752) was probably something of a child prodigy and Ernst Ludwig Gerber records that hereceived an appointment as harpsichordist to the Prussian Court at Berlin by the age of 14.

Regardless of this and other successes inthe theatre, Pepusch was most highly esteemed in his own lifetime as a composer of concertos. Georg Philipp Telemann considered him as one of the best six German composers.

As with Handel, later Germans and Britons both claimed Pepusch as their own.Pepusch is best remembered today for his contribution to The Beggar’s Opera (1728), for which he composed a fine overture. Apartfrom that overture, none of his other pieces had received commercial recordings until today. It is our hope that this CD goes somedistance to remind audiences why Pepusch was once so highly regarded across Europe as a fine composer of inventive and dramatic concertos.

The original Harmonious Society of Tickle-Fiddle Gentlemen was formed in London in 1678 by Roger L’Estrange and Thomas Britton and a group of the same name was still giving concerts in the middle of the eighteenth century. This new ensemble of has been formed under the same name and whose central repertoire is drawn from the collections of manuscripts and prints associated with the original ensemble and London concert life in general, as well as other fascinating corners of baroque repertoire. Typically the ensemble consists of around 4 violins, 1 va, 1 cello, 1 bass, harpsichord/organ and theorbo/lute. We are also sometimes joined by oboes, flutes and even singers.