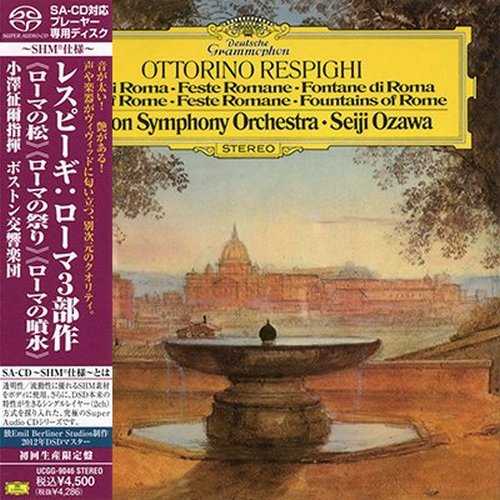 A very popular piece of classical music which is on many a fans radar……it sure is on mine. While most fans have this on sacd this particular release includes four additional tracks which were omitted from the Rca living stereo discs..as well as from other albums. These four tracks are Roman Festivals and feature some dynamic sound.

Most of us are familiar with Rubenstein’s performance which is fantastic. I would suggest in giving Ozawa’s recording a listen. If one is sensitive to Classical music in general……..this piece runs the gamut of many different emotional levels. Its tender, exciting, ominous and fantastically glorious.

While I really like the previous sacd release of this classic (Rca) I find the recorded sound to be rather bothersome. There seems to be either tape damage or distortion going on. This distracts me from my overall enjoyment as it jerks me away from the musical reverie. In short the Living stereo recording is overrated in my opinion. I also purchased the recent sacd remaster which has some improvements on some levels but is not better on others. Even this new sacd bothers me. Said sound problems still exist.

Are the Rca living stereo recordings the greatest ever done??? Perhaps. Can other recordings match them for sound quality?? Yup. This is one of them. This newer sacd is clearer while the previous sacds are a tad more darker. It depends on ones preference I guess.

I like Ozawa’a work in general and leave him some latitude when I compare him to other more famous Conductors. His performance on this piece is most excellent and will give your stereo system a good work out.

The fourth track…..Pines of Via appia has the single greatest finale I have ever heard on classical sacd. Its only fitting that this is an Shm Sacd since the sound is so glorious. I was not expecting it……I thought my speakers were going to explode. I wondered what was happening and where this amazing sound was coming from. It sounds mind-blowing on headphones as well. No distortion…..or fragility in the upper octaves……just incredible, monstrous sound that bests the Rca sacds easily. I have to believe that the technicians were using sound meters to measure just how loud the recording could be captured without blowing out the microphones.

If you are a fan of this classical piece its a no brainer. It also includes the four additional tracks which flesh out this piece all the better and they feature some powerful crescendo’s as well.

I recommend this Shm Sacd and consider it a stellar sounding disc.

It must be played loudly but a warning………the stereo system must be able to pass the information without risk of damage on track four. By all means play this track loud for the full effect of recorded beauty.